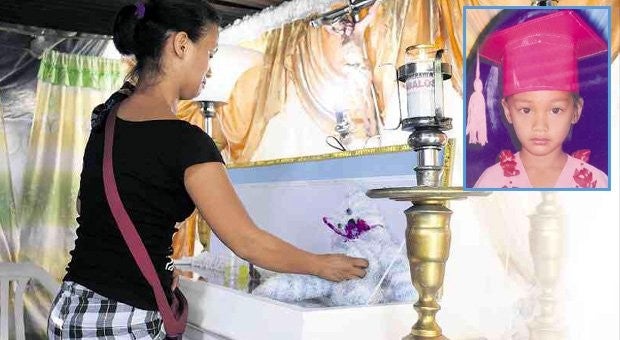 YOUNG VICTIM A relative grieves beside the coffin of Danica May (inset), 5, who was felled by an assassin’s bullet intended for her grandfather on Tuesday. WILLIE LOMIBAO/INQUIRER NORTHERN LUZON FILE PHOTO

Family members would hear footsteps of a child from their one-room house every day as they prepared food for their small eatery nearby, according to Gemma Garcia, Danica’s grandmother. Sometimes there was also the whiff of a freshly extinguished candle.

“We know it’s her. She’s still here. She has not left us,” said Gemma.

Danica was killed by a bullet intended for her grandfather, Maximo, who survived the attack on Aug. 23.

But it’s not Danica’s presence that scares the people she left behind.

Danica’s murder took place three days after Maximo visited the police to clear his name. A village official had told him that he was on the  watch list of suspected drug dealers.

“We are more scared of the people who regularly pass by, maybe to check on us,” Gemma said.

The police have identified the gunman who shot Danica but they have yet to arrest him.

Gemma said the family, including her children and grandchildren, often smelled the whiff of a freshly extinguished candle, which she believed was Danica’s way of reminding them that she was around.

Every time they eat dinner, she said, the family would always put food on a saucer and place it in front of Danica’s picture as “atang” (offering) because food would inexplicably spill out to the floor or table.

“When she was alive, she would always ask for a share whenever she saw somebody eating,” Gemma said in Filipino.

Two nights after Danica was buried in a public cemetery here on Aug. 31, one of Gemma’s children saw a girl sitting and crying beside a plastic cabinet in their house.

“That was Danica’s favorite place. Maybe, she wanted to tell us something,” said Gemma.

After Maximo was discharged from the hospital, he went into hiding, Gemma said.

“He did not even see Danica during her wake and he was not there during her burial.