28 complainants include the van driver who ran over protesters
By: Kristine Felisse Mangunay - Reporter / @KFMangunayINQ
Philippine Daily Inquirer / 02:57 AM October 29, 2016 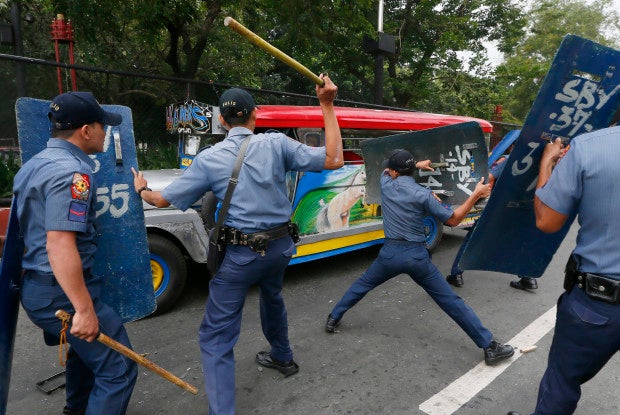 The Manila Police District (MPD) has filed countecharges against the activists whose Oct. 19 demonstration outside the US Embassy ended in a bloody dispersal, stressing it was the protesters who started the violence.

The complainants included PO3 Franklin Kho, the officer who drove the police van that hit and ran over several protesters, and 27 other MPD personnel who said they were also wounded in the clash.

There were 34 named respondents, among them Renato Reyes, secretary general of Bagong Alyansang Makabayan; Nathaniel Santiago also of Bayan; Roberto de Castro of Kilusang Mayo Uno; Piya Malayao of Sandugo, and Nicole Soria of Kabataan party-list group. Malayao and Soria were two of the three protesters ran over by the van driven by Kho.

Of the 28 complainants, only Astucia and Kho were the named respondents in the complaint filed by the protesters on Wednesday in the Office of the Ombudsman. They were accused of attempted murder, grave abuse of authority, serious physical injuries, unlawful arrest, conduct unbecoming of a public officer, gross misconduct and violation of the Rights of the Accused and the Public Assembly Act.