After hearing the ‘voice of God,’ Duterte swears he won’t swear again 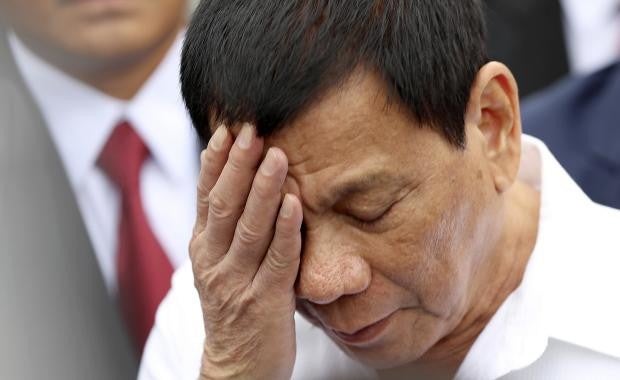 DAVAO CITY, Philippines—On his way home from a state visit in Japan on Thursday, President Duterte said he promised God that he would stop swearing.

The foulmouthed President, who once called Pope Francis a “son of a bitch” and told US President Barack Obama to “go to hell,” recalled the incident before the start of his press conference upon arrival at the airport here late Thursday.

Mr. Duterte said that on the flight home, he was looking at the sky while everyone was sound asleep when he heard a voice that said “if you don’t stop (throwing) epithets, I will bring this plane down now.”

“So, I promised God to … not express slang, cuss words and everything. So you guys hear me right always, because (a) promise to God is a promise to the Filipino people.”

Mr. Duterte’s profanities have become a trademark of his political persona, especially when threatening to kill drug dealers as part of his war on illegal drugs that has left thousands dead since he took office at the end of June.

Asked later whether he would no longer throw cuss words at the United States, European Union and Sen. Leila de Lima—who had once linked the former Davao City mayor to the Davao Death Squad—Mr. Duterte demurred.

“It all depends on the timing,” he said. “It’s all calibrated. I don’t like anybody reading my mind. Watch out for one thing—miscalculation—that’s what I’ve learned,” he added.

Mr. Duterte’s vow was met with applause, but he cautioned: “Don’t clap too much or this (pledge) might get derailed,” he said.

Presidential spokesperson Ernesto Abella described the President’s remark about God threatening to kill him if he did not stop cursing as Mr. Duterte’s “personal insight.”

Said Abella, a former evangelist: “It was a particular insight that came to him. He did not describe the process, although he did say that he heard a voice that told him (such). You know, it’s a way of saying that he had a personal, a deep personal insight into the matter.”

Abella recently asked reporters to use their “creative imagination” when they asked him to clarify Mr. Duterte’s speech before a Jewish assembly where he said he was severing the country’s ties with the United States. “Let’s try to use our creative imagination, OK? Let’s not be too literal,” Abella said, adding that the President’s pronouncements may only be considered policy statement when followed by “an official action.”

On social media, netizens mocked the plane incident, with one Facebook user posting: “If you talk to God, it’s called prayer. If God talks to you, it’s schizophrenia. —WITH A REPORT FROM AP AND GIL CABACUNGAN