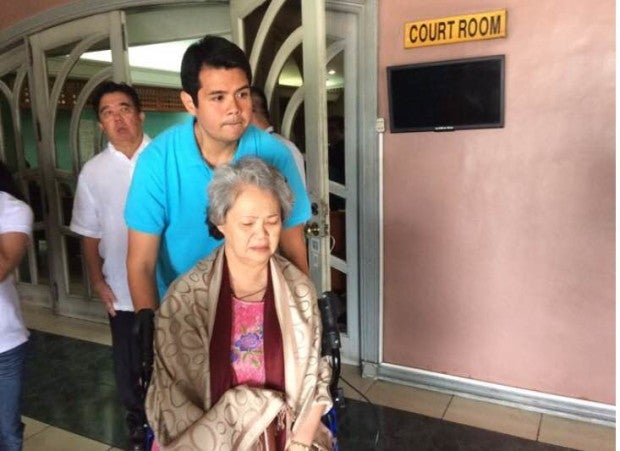 Ma. Fatima Valdez surfaces from hiding and pleaded not guilty to her plunder charge over the alleged misuse of charity funds. VINCE NONATO/INQUIRER PHOTO

A co-accused in the plunder case of former President Gloria Macapagal-Arroyo has surfaced from hiding and pleaded not guilty to her plunder charge for the alleged misuse of charity funds.

Ma. Fatima Valdez entered a not guilty plea during her arraignment for plunder on Thursday after she surrendered to the National Bureau of Investigation (NBI) on Oct. 11 upon returning from New Zealand.

Valdez was charged with plunder as a member of the Philippine Charity Sweepstakes Office (PCSO) Board of Directors.

The elderly and frail Valdez, 69, arrived in the court room seated on a wheel chair.

Valdez pleaded to the Sandiganbayan First Division that she be placed under hospital detention at the Makati Medical Center under the custody of the NBI.

In her urgent motion, Valdez said she has not been feeling well since she turned herself over to the NBI after arriving at the airport on Oct. 11.

She said she had undergone open heart surgery for a post aortic valve replacement and that she has a simultaneous dual chamber pacemaker.

In fact, Valdez’s arraignment was earlier deferred after she was placed under intensive care unit at the Makati Medical Center due to a possible risk of stroke, her motion said.

“Accused Valdez is now requesting this Honorable Court that she be allowed to be detained at the Makati Medical Center, under the custody of the NBI,” Valdez’s motion read.

“This request is being made in consideration of the age and current medical condition of accused Valdez,” it added.

Valdez requested hospital detention as she plans to file a petition for bail.

Valdez emerged from hiding after the Supreme Court cleared Arroyo and PCSO budget official Benigno Aguas of plunder and released them from detention. Arroyo was under hospital detention for four years.

Arroyo walked free in July after the Supreme Court junked her remaining plunder case for insufficiency of evidence.

The plunder charge filed against Arroyo involved allegedly diverting P366 million in PCSO intelligence funds intended for charity use for her personal gain during her term as President from 2008 to 2010.

The high court said Arroyo’s approval of the P366-million intelligence fund releases was only ministerial and did not constitute an “overt act” to commit plunder. RAM/rga