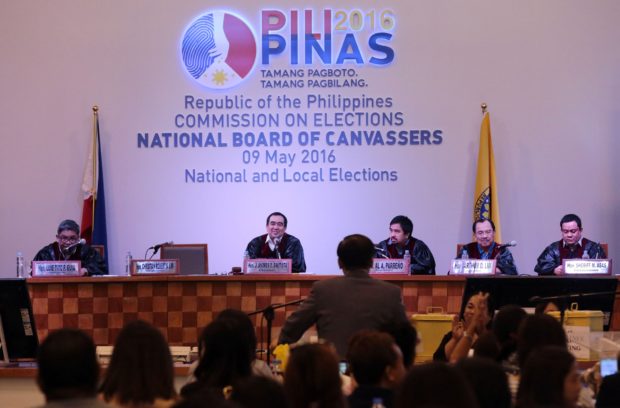 Commission on Elections convening as the National Board of Canvassers for the May 9 elections.
INQUIRER PHOTO / GRIG C. MONTEGRANDE

MANILA — The Commission on Elections (Comelec) on Wednesday clarified that it could officially investigate President Duterte’s statement of contributions and expenditures (SOCE) after the filing of a formal complaint backed by an affidavit. Right now, the poll body is validating all SOCEs of election candidates as a matter of course.

“We are validating all SOCE submissions. We are not singling out the President,” Jimenez said in a statement.

President Duterte earlier said in a speech that the Ilocos Norte governor was one of his campaign donors in the May presidential elections.

“If someone were to file a verified complaint, then possibly we can investigate. We cannot start a particular investigation based only on the President’s statement. There should be an affidavit that the President actually said it,” Jimenez added.

Under Comelec’s Omnibus Rules on Campaign Finance, an incomplete SOCE is considered “not filed,” a violation that carries a P30,000 fine for presidential candidates and political parties.

Non-disclosure of donors, on the other hand, is an election offense, according to Section 106 of the Omnibus Election Code, which requires candidates and treasurers of political parties to issue a receipt for every contribution, as well as keep “detailed, full and accurate records of all contributions received.”  SFM