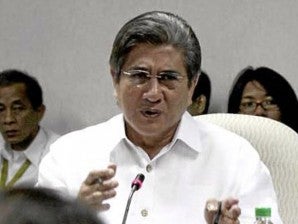 MANILA, Philippines – A destabilization plot against the Aquino government will fail because the military is “solid” behind President Benigno Aquino III and because there is no “credible personality” within or outside the institution who can lead a successful move against the administration.

No less than Senator Gregorio Honasan, who launched several coup attempts against Aquino’s mother, the late President Corazon Aquino, issued the statement on Wednesday amid destabilization talks against the present leadership.

“No, I don’t think it will succeed because the reasons have to be very, very much deeper. It must be widespread,” Honasan said in a phone patch interview.

“And there’s no credible personality inside and outside the military organization that can pull it off. Of course, the last but very critical ingredient is if it would generate popular support,” he said.

On the contrary, Honasan noted that the President was enjoying the support of the armed forces.

“With the President enjoying a reasonably high trust rating , with a very clear delineation of the hierarchy of commanders – from the Commander-in Chief- to the Secretary of Department of National Defense to the Chief of Staff – down to the service commanders and the lower commanders, napaka-intact. Napaka-solid nyan [They’re very intact and very solid]. Everybody’s on top of the situation from the Commander-in-Chief down the line,” he said.

Unlike the 1986 people revolt, the senator also saw no compelling reason to justify a destabilization move against the present administration.

“Kailangang may [There should be a] situation. There must be a very deep reason that was present in let say in EDSA1986 – massive ang graft and corruption [there is massive graft and corruption] in government, may favoritism sa military at talagang hating-hati ang military noon [there is favouritism in the military and it was really divided before]. Ngayon, intact [Now it’s intact]. To my mind it’s very, very intact. The armed forces is solid behind the Constitution and the commander-in-chief, who represents the Constitution,” he further said.

As far as his sources in the military are concerned, Honasan said there was no on- going recruitment to topple the government.

He said the situation was not “encouraging for recruitment for destabilization” because the military was busy in going after the Moro rebels responsible for a series of attacks in Mindanao.

But Senator Antonio Trillanes IV, in a text message to reporters, confirmed Malacanang’s statement that there was a destabilization plot against the Aquino government.

“Yes. It is consistent with the information that we have gathered. But whether it would go beyond a coup rumor, I seriously doubt it,” said Trillanes.

“While, admittedly, the morale is low right now, this is but normal and will probably wane soon. Being allowed to conduct pursuit operations will help ease their restiveness,” he said.

Trillanes reminded the public that former President and now Pampanga Representative Gloria Macapagal-Arroyo committed “far worse crimes against the soldiers and the people but these same disgruntled officers never even considered rising up against her.”

“So, by and large, all is well,” the senator added.