Denuclearizing North Korea a ‘lost cause,’ US intel chief says 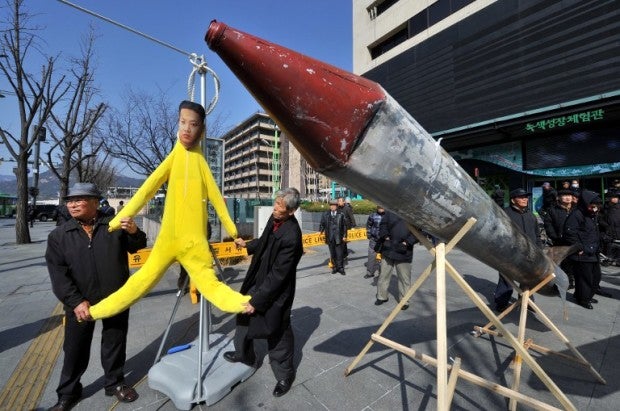 South Korean conservative activists hang an effigy of North Korean leader Kim Jong-Un next to a mock North Korean missile during a rally in Seoul on March 20, 2012. US Director for National Intelligence James Clapper said on Oct. 26, 2016, that efforts to convince North Korea to give up its nuclear program were bound to fail. AFP FILE

WASHINGTON, United States — Efforts to convince North Korea to give up its nuclear program and “denuclearize” the Korean Peninsula are bound to fail, US Director of National Intelligence James Clapper said Tuesday.

The United States is set to deploy its THAAD missile defense system to South Korea as soon as possible, despite opposition from China, in an effort to protect against North Korea’s pursuit of missile and nuclear technology.

“The notion of getting the North Koreans to denuclearize is probably a lost cause. They are not going to do that. That is their ticket to survival,” Clapper said during an event at the Council on Foreign Relations think-tank.

“And I got a good taste of that when I was there, about how the world looks from their vantage. And they are under siege, and they are very paranoid. So the notion of giving up their nuclear capability, whatever it is, is a nonstarter with them.”

Clapper, who went on a secret mission to North Korea in November 2014 to rescue two American prisoners, oversees the 17 US intelligence agencies, including the CIA and National Security Agency.

After Pyongyang carried out its fourth nuclear test in January, the Security Council adopted the toughest sanctions resolution to date, targeting North Korea’s trade in minerals and tightening banking restrictions

State Department spokesman John Kirby rebuffed Clapper’s position, stressing that “nothing has changed about our policy with respect to the North.

“We want to continue to see a verifiable denuclearization of the peninsula,” he added.

“We want to see a return to the six-party talk process, and that means we need to see the North show a willingness and an ability to return to that process which they haven’t done yet.”

The talks between the hermit state, China, Japan, Russia, South Korea and the United States have been frozen for years.

Retired US diplomats met senior Pyongyang officials in Malaysia over the weekend, the latest in a series of unofficial talks commonly referred to as Track 2 that are closely monitored in the absence of any official contact between Washington and Pyongyang.

In July, the North cut off its only remaining official channel of diplomatic communications with the United States in retaliation for American sanctions against its leader, Kim Jong-Un.

After Pyongyang carried out its fourth nuclear test in January, the Security Council adopted the toughest sanctions resolution to date, targeting North Korea’s trade in minerals and tightening banking restrictions.

The ongoing negotiations on the new sanctions measure are focused on closing loopholes and zeroing in on North Korea’s nuclear and ballistic missile technology industry, according to Security Council diplomats. CBB