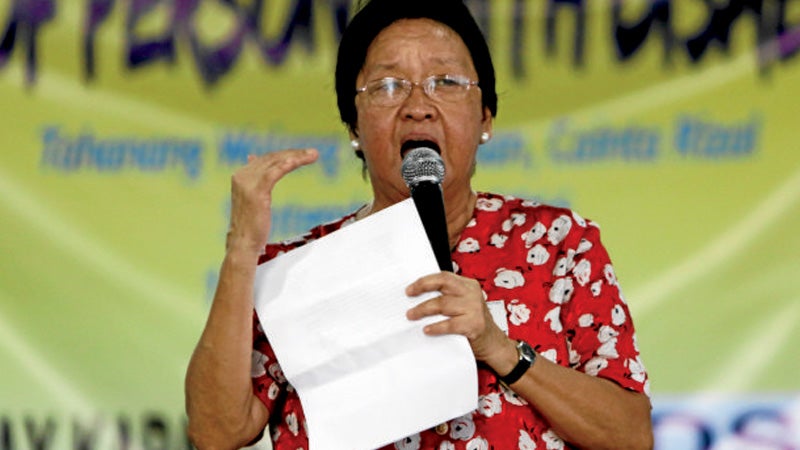 Taguiwalo:We are doing our best tomake sure that the Yolanda experience in terms of delayed
provision of emergency shelter assistance should not be repeated. —INQUIRER PHOTO

The Department of Social Welfare and Development (DSWD) has found that at least 200,000 victims of Supertyphoon “Yolanda” have been exluded from the Aquino administration’s emergency shelter assistance (ESA) program because of local politics.

Social Welfare Secretary Judy Taguiwalo said her department had submitted to President Duterte its review of the multibillion-peso donations for victims of Yolanda (international name: Haiyan), including their discriminatory treatment, largely due to their political color.

“The main problem with Yolanda is while we have provided more than one million emergency shelter assistance to the victims, there are around 200,000 claimants who expressed the complaint that they were victims of Yolanda in Region 8 (Eastern Visayas) and Region 6 (Western Visayas) but they were not given the assistance needed,” Taguiwalo said in a briefing in Malacañang on Monday.

Yolanda smacked the Visayas on Nov. 8, 2013, with powerful peak winds of 315 kph, the world’s strongest on record to hit land. The monster typhoon killed more than 6,000 people and rendered homeless 16 million people in 44 provinces.

The DSWD report on Yolanda donations, to be released before the third anniversary of the storm, was undertaken on the request of farmers and fisherfolk still looking for their promised homes. She said the investigation did not cover the donations coursed through private entities.

Under the memorandum, survivors whose houses were destroyed or damaged were ineligible to receive cash aid if their families had monthly incomes of more than P15,000 and if they were living in areas tagged as danger zones.

Soliman said she was confident she could defend the department’s record.

“I am open to an investigation and I’m willing to face appropriate authorities with regard to Yolanda funds,” she said when reached for comment.

Taguiwalo said the DSWD report centered on Western and Eastern Visayas, specifically on whether department regulations were complied with.

She said that core shelter assistance was “problematic” because the funds were downloaded in one blow (and not in tranches) even before they secured the land on which the houses would be built.

“The idea is not really fault-finding. The idea is how do we safeguard the money? So far, one new guideline we have made is the emergency shelter assistance should be given immediately but we need to protect it, you know. We need to ensure that those who are included are the ones qualified. Otherwise, we’ll have problems of inclusion, exclusion. We need to shell out the money now, even a small amount, because if it’s two months after, you know, it will be too late. They need the money now to rebuild the house,” Taguiwalo said.

She said that 200,000 victims were unfairly excluded, especially 100,000 in Leyte and Samar and 81,000 in Panay, because their houses were in danger zones and the local government units were reluctant to fund their relocation.

“Because it went through the local government units and again, there was this unfair treatment. There were people who were victims of Yolanda but who were not part of the political groupings of particular local government officials so they were excluded. We have that a lot,” Taguiwalo said.

“I think, generally, the money has gone to the people but there are cases of irregularities, noncompliance or nonimplementation. But this is a minority. Even then, you know, even if it involves only one municipality, for example, that is unacceptable because this is money given to our people,” Taguiwalo said.

She explained that Mr. Duterte’s marching orders were for “prompt and compassionate assistance for all regardless of political color.”

The Aquino administration was lambasted for politicizing the government relief operations in Tacloban City with then Interior Secretary Mar Roxas summing it all up with his infamous quote—“You are a Romualdez and the President is an Aquino.” He referred to then Tacloban Mayor Alfred Romualdez, a nephew of former first lady Imelda Marcos. —WITH A REPORT FROM DONA Z. PAZZIBUGAN