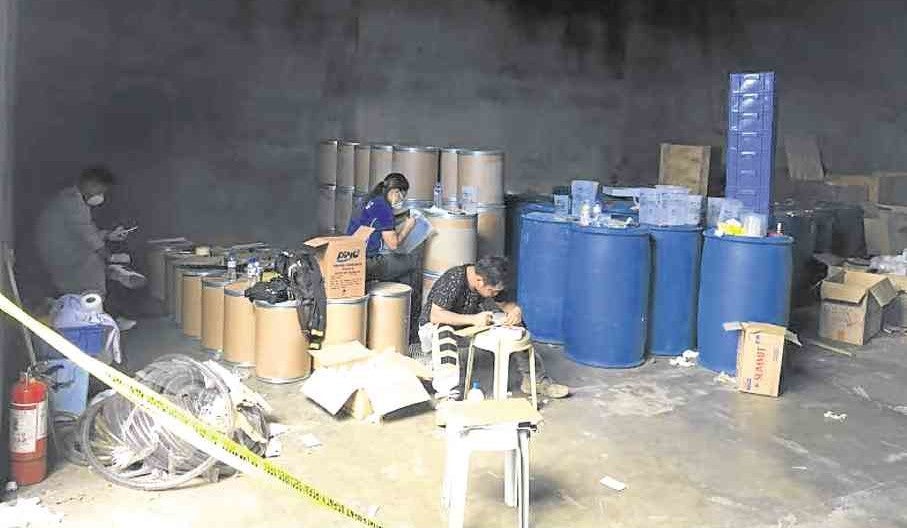 Policemen and antinarcotics agents conduct an inventory of materials and equipment found in a “shabu” laboratory in Cauayan City. —VILLAMOR VISAYA JR.

Kim Punzalan Uy, also known as Atong Lee, Chua, Lung and Jixin Li Huang, and a Chinese national named Kang Bo She (identified in another police report as She Cangbo) were killed in a clash with a team of policemen and Philippine Drug Enforcement Agency (PDEA) agents who served a search warrant on the warehouse that housed the laboratory along the Maharlika Highway here.

Police said they found chemicals and laboratory equipment known to be used in the manufacture of shabu. Also recovered were guns, a pickup truck and assorted documents.

Cauayan is about an hour’s drive from the capital city of Ilagan, where Mr. Duterte met with provincial officials and typhoon victims. He was informed about the raid in Laoag City, where he also visited and met with Ilocos Norte Gov. Imee Marcos on Sunday night.

Police said the equipment recovered from the laboratory could produce 200 to 400 kilograms of shabu.

Director General Ronald dela Rosa, Philippine National Police chief, said Uy had been under surveillance since December last year, after they found out that he had been buying chemicals and materials associated with the manufacture of shabu.

“[Uy and his companion] had been testing the machines. Luckily, we busted the shabu laboratory before it could start full operations,” Dela Rosa said.

Dela Rosa said Uy was a member of a drug syndicate with links to the groups of Mike Lee, Ahong and Atong Lee.

Director Ismael Fajardo of the PDEA special enforcement services division said the raid was the result of “a well-built case and a well-coordinated surveillance operation.”

The warehouse is owned by a former town mayor of Isabela. Uy had been renting the place for P35,000 a month.

Because of the discovery, Cauayan Mayor Bernard Faustino Dy said teams from the police and the Bureau of Fire Protection would start inspecting other warehouses in the city.

Dy said the warehouse acquired a business permit to sell goods and glassware.