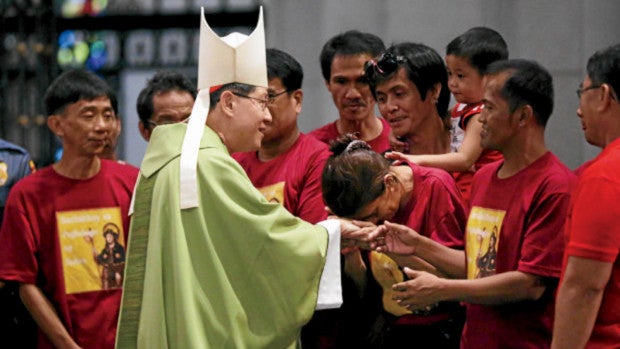 Surrenderees reach out to Tagle after the Mass at theManila Cathedral. —MARIANNE BERMUDEZ

The Catholic Church in Manila yesterday launched a drug rehabilitation program to provide parish-based assistance to “surrenderees” in the government’s anti-illegal drugs campaign.

The program was put up in response to the rising concerns about the treatment of hundreds of thousands of drug users under the Duterte administration’s bloody war on illegal drugs.

Set up in all the parishes under the Manila Archdiocese, the program offers drug users from the cities of Pasay, Mandaluyong, Makati, San Juan and Manila and their families spiritual formation, counseling, sports, cultural and livelihood training to help in their healing and restoration.

Under the Sanlakbay program, drug surrenderrees and their families can
undergo three to six months’ counseling and two to three months’ economic empowerment programs to make them financially able.

They will also participate in weekly and monthly sports and cultural programs in their parishes for their physical and creative development. Those requiring six-month to year-long intensive intervention will be given the necessary care in a private pastoral rehabilitation center.

The Center for Family Ministries, University of Santo Tomas Graduate School Psycho-Trauma, Department of Interior and Local Government, and Philippine Drug Enforcement Agency have been tapped to be part of the
program.

“We seek healing justice, not revenge, because only justice heals. Revenge wounds all the more,” said Tagle in his homily during the Mass at the Manila Cathedral that kicked off the “Sanlakbay para sa Pagbabagong Buhay Program.

Police said more than 730,000 drug pushers and users had surrendered under the Oplan Tokhang campaign as of early October. At least 29,000 of these surrenderees were from the cities in the Manila Archdiocese.

“Are we going to just let them die? Leave them sprawled [on the street]? If we don’t do anything, we will have blood on our hands. So the response of the Church is to help them and be part of their sufferings,” said Fr. Roberto de la Cruz of the Manila Archdiocese Restorative Justice Ministry.

Giving details of the program at the launch yesterday, De la Cruz said Sanlakbay was a collaborative effort of the Catholic Church, the government and the private sector.

In his homily, Tagle said wrongdoings must be discouraged and eradicated from society but through restorative justice. “When justice is restored, it brings healing not destruction. We restore the sinner, we restore the family and the society by giving the repentant sinners hope,” said the archbishop.

“In the eyes of the Church, drug addiction and all other forms of addiction are also a spiritual concern… so the response is not giving judgment but helping victims of addiction to know God and surrender to him,” he added.

Warfare in the heart

“This spiritual warfare within the heart of an addicted person and the relational dimension in the family and community we hope to address through our collaborative efforts so the victims find
healing and restoration,” Tagle said.

The Catholic Church was one of the first institutions and individuals to raise a voice against the killing of suspected drug users and pushers by the Duterte administration. Over 3,000 suspects have been killed in barely four months.