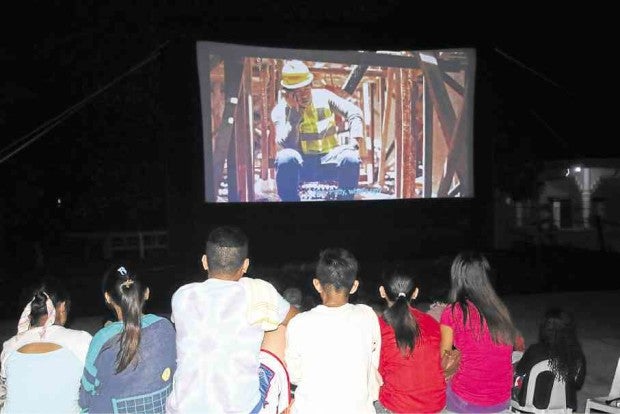 NABUNTURAN, COMPOSTELA VALLEY—In a landlocked town with no theaters, a 20-foot projector screen would be the next best thing to a cinema experience for 15-year-old Juvy Clarito, who started watching locally produced short films outdoors near the municipal hall.

“It inspired me,” Clarito said after seeing films produced by her older counterparts. She and the other filmmakers are under the Special Program on Media Arts at Nabunturan Comprehensive National High School.

Clarito’s film, a 29-minute documentary called “Asay,” which portrays a day in the life of “professional” gatecrashers who attend birthday parties, wakes and fiestas of strangers, was a product of the workshop program she joined this year. It was one of the films featured under the student film category in the Nabunturan Independent Film Exhibition or Nabifilmex, an annual regional film festival held in Nabunturan every September.

A novice and ecstatic Clarito ran out of words to say later that night as she received the Sulyap Kultura Award given by the National Commission for Culture and the Arts (NCCA), one of the festival’s top prizes.

The festival has been attracting filmgoers not only in their communities but across other regions in Mindanao and the rest of the country as well.

It was started as part of the town’s Simbalay Festival and Compostela Valley’s overall tourism efforts after it was hit by Typhoon “Pablo” (international name: Bopha) in 2012, said Karen Santiago-Malaki, Nabifilmex director and former municipal administrator. It showcased student short films which were produced in a filmmaking workshop sponsored by the NCCA and the Sangguniang Kabataan.

“It was a difficult start. The local government was hesitant because there was no theater and the understanding toward these kinds of arts and culture promotion was limited,” Malaki said, adding that the films were screened in a school gym, not knowing whether an audience would come.

A year later, the organizers were able to obtain a grant for another workshop and restaged the festival, this time with support from the local government. They also received a response to an e-mail they sent to the Open Air Cinema Foundation.

“We must have done something good,” Malaki said. The group’s vision of “a unique viewing experience” was realized.

Nabifilmex has also welcomed entries from other parts of the country and those that made the rounds of national and regional festivals, aside from student-produced films from Compostela Valley.

Young filmmakers, like Niko Limos, who joined the first Nabifilmex continue their craft.

“Nabifilmex became a platform to express our voices and talents. We were able to interact with professional filmmakers,” Limos said. His film, “Warak,” the story of a man who struggles with memories of a war-torn past, won as best student film this year.

The workshops also catered to public school teachers in Compostela Valley under a Nabifilmex partnership with the provincial office of the Department of Education.

The best film of this year’s festival, “Panggaw”—a metaphor on the Filipino crab mentality—was made by Mary Ann Gabisan, a public school teacher in the town of Monkayo. Her previous film, “Tami-aw,” had been screened in regional film festivals, such as the Mindanao Film Fest and the Cinema Rehiyon last year.

Gabisan is among those what festival curator and award-winning Mindanao filmmaker Arnel Mardoquio noted as emerging regional filmmakers who, through Nabifilmex, have developed into “storytellers.”

“This is not just a festival. This is also an advocacy helping develop the community,” Mardoquio said.

Nabifilmex is planning to bring filmmaking down to the barangay level. Currently, organizers are doing school tours and showcasing past festival films to contribute to audience development.

“I really appreciate film festivals like this because it’s localized. The whole community can be involved,” said Blaine Johnson, executive director of the Open Air Cinema Foundation, said.

“I hope other communities can pick up the idea. It doesn’t cost that much. The hard work comes with making the films. If Nabunturan can show the skills the schools and the kids are gaining, maybe other communities see the advantages,” Johnson said.

The enthusiasm has been picked up by the local government, with both provincial and municipal officials pledging to help fund the festival, including donating a lot as site for a local Cinematheque like the one in Davao City.

“Filmmaking is part of the development of our youth as a creative outlet and part of sustainable development that we need to support,” Gov. Tyrone Uy said. —CONTRIBUTED