Where Vivaldi soars above the noise of dump trucks

Not far from the Payatas landfill where children can easily fall prey to crime and vice, Sparrow Music provides a safe haven and an opportunity to hone young talents in classical music
By: Jhesset O. Enano - Reporter / @JhessetEnanoINQ
Philippine Daily Inquirer / 12:10 AM October 23, 2016

The sight of shanties and mounds of trash, and the rancid odor wafting through the air, hardly befit a place rosily called Lupang Pangako (Promised Land). But for some of the children growing up in this slum area in Payatas, Quezon City, there’s a portal that can get them out of the squalor and cycle of poverty.

That passage has melody for bricks and harmony for a pathway, engineered by the likes of Vivaldi and Beethoven.

Inside a beige, two-story house near the foot of the Payatas landfill, the youngsters gather regularly as pupils of Sparrow Music Philippines, a 2-year-old center that offers music instruction for free to kids aged 7 to 15 years.

In a community where minors can easily fall prey to crime and vice, Sparrow Music provides not only a haven for values formation but also a nursery for talents in a field usually associated with the highbrow and well-heeled.

For the mentor wielding the baton, Ferdinand Medina, putting up Sparrow Music is a dream come true. 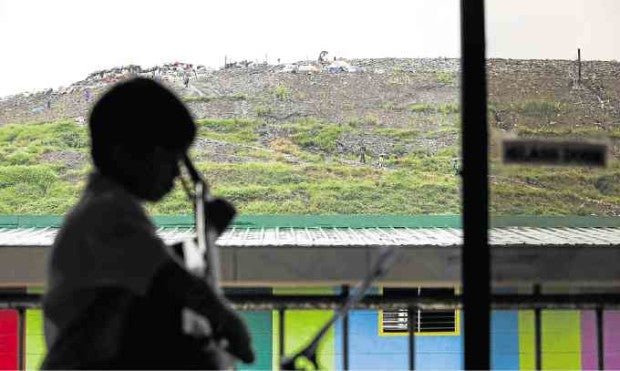 The “hills”—or the Payatas landfill in the background—are alive with the sound of Sparrow Music. —PHOTOS BY LYN RILLON

A form of therapy

The 37-year-old Medina has been a longtime community worker, journeying to places like strife-torn Tawi-tawi and post-“Yolanda” Tacloban, and bringing his music as a form of therapy for victims of disasters, conflict or abuse.

He serves as executive director of Sparrow Music, which he helped organize in January 2014 together with Filipino-Americans based in the United States. Since then, the center has helped children see a world beyond their garbage-ridden environment.

Five days a week, some 50 students gather at the house on Lupang Pangako to study and play the classics, the sound from their sessions often soaring above the din of incinerator and dump truck operations at the landfill, which can be seen from the veranda. Their repertoire includes “Spring” by Antonio Vivaldi, “Fur Elise” by Ludwig van Beethoven, “Canon in D” by Johann Pachelbel, “Divertimento for Guitar” by Mario Giuliani, “The Birdling’s Serenade” by Michael Aaron, and “Nina” by Giovanni Pergolesi.

Instead of loitering in the streets or picking up fights, the children, who usually show up after class and still in their school uniform, keep their eyes glued to the music sheets and their fingers busy on guitar strings or piano keys.

“This is our initiative to level the playing field, so that not only the rich can get music lessons,” said Medina, a graduate of the University of the Philippines College of Music, where he also teaches. “At the same time, we help spread music to the urban poor.”

With over 100,000 inhabitants, the Payatas community has grown around what used to be an open dump that received the bulk of Metro Manila’s solid waste. Since the dump was converted into a sanitary landfill in 2001, it has benefited from government, civic and private sector initiatives in terms of education, livelihood and even technology transfer.

But it was Payatas at its worst that drew Medina to these parts: He could clearly recall how a massive “trash-slide” buried alive hundreds of people, mostly scavengers, on July 10, 2000. 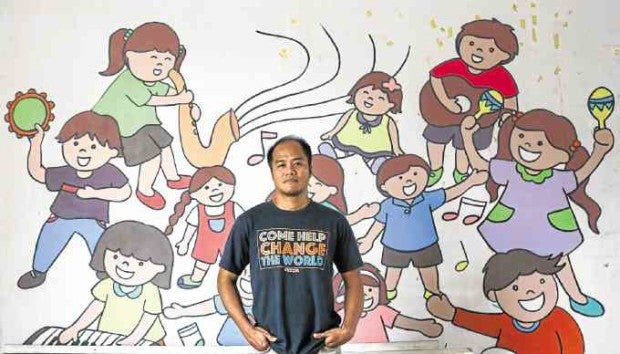 Music teacher Ferdinand Medina is also a community worker who hopes to “level the playing field.”

“Our students here are the poorest of the poor,” he said. “Some of them are children of scavengers, if not scavengers themselves.”

He said some kids had been used as accessories to petty crimes like theft.  Talk about illegal drugs was common, even among the younger ones, as they had personally seen family members or neighbors use them.

“Beyond music, we also teach character development and life skills, and provide them guidance in decision-making,” he said. “We have a partnership with parents and make sure they are involved in their children’s growth.”

Sparrow Music runs on donations from friends and partners abroad, as well as from pooled resources. It currently has 11 volunteers, six of whom are the kids’ parents themselves who help prepare home-cooked lunch for the two batches of students in the morning and afternoon.

Running the center isn’t always easy, especially for Medina, a new father who has already made a name for himself as a young musician performing alongside personalities like Gary Valenciano and Lea Salonga. Financial issues and the community’s unsanitary environment add up to a daunting task. 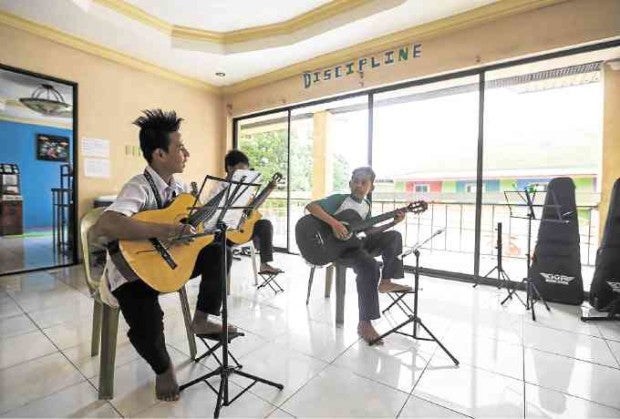 Youths from one of Quezon City’s poorest communities discover the classics.

A few months after Sparrow Music opened its doors, Medina returned from a Holy Week break to a nearly empty center, with nearly P200,000 worth of electric guitars, keyboards, laptops and projectors gone. Though disheartened at first, he gathered his resources once more and soldiered on.

Today, the center has transferred to a new building, with several practice rooms and donated musical instruments, a kitchen, and a small library with textbooks and children’s storybooks. The students work on their school assignments here together, using the center’s donated computers and printers. They also participate in Bible studies.

On their own, the students practice for in-house recitals and outside performances, or sing pop songs. Despite the smell of garbage lacing the air,  they savor the chance to enjoy their time as children.

“During our first year, there was a lot of violence among them, like fistfights and cursing, but this was merely a reflection of what they see in their homes,” Medina said. Some of the children come from families plagued with domestic issues, such as sexual abuse, physical violence and neglect.

A bigger world outside

The music then becomes the children’s outlet. “You can see their attitude and how it changes in the way they perform,” this mentor added. “Many have overcome their past bad habits.”

Using his own van, Medina sometimes takes them to the UP Diliman campus, though their huge number makes such trips a challenge. “But it is important to build their hope, (let them see) that there is a bigger world outside Payatas,” he said.

Before Sparrow Music, the children’s world were limited to what they see. When the children first came to the center and Medina asked them to draw their dreams, he saw how many of them “wanted to be jeepney drivers or barkers … But now, their dreams are much more diverse: guitarist, chef, singer, soldier, karate master.”

Though he worries for the children once they step out of the music center, Medina can only do his best to guide and teach them the ways of life through a common love for music.

“Sparrow Music’s name is from a Biblical parable that says even sparrows are not forgotten in God’s eyes,” he said. “Here, not one child is forgotten.”