Duterte wants to have coffee with cop who ran over protesters 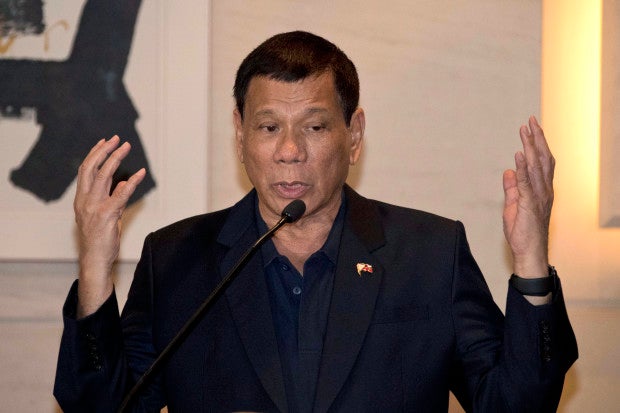 DAVAO CITY—President Rodrigo Duterte on Friday said he would invite for coffee the police officer who rammed into Wednesday’s protest line outside the US Embassy in Manila to ask him why he did it.

“I will try to talk to him peacefully, invite him for coffee,” Duterte said. “I will also talk to the activists.”

He said he was not justifying the act of PO3 Franklin Kho but he might have been under stress at that time.

“They were surrounded by a group of militants,” Duterte said, “Nobody would do that, maybe he was under stress, they might have ganged up on him,” Duterte said.

“I’m trying to look at it from different dimensions,” he said, adding that he also wanted to know what really happened.

Sandugo, the group that led the Lakbayan-rally from Mindanao to Manila, said it was ready to dialogue with Duterte over the issue of the violent dispersal of the rally.

Sandugo co-convenor Piya Macliing Malayao, one of those severely injured when Kho rammed the police van he was driving into the protest line, said the dialogue would help them “clarify the events that transpired during the violent dispersal.”

Malayao said while Duterte claimed he was “not justifying” the actions of the police, it was clear that the President had only heard the side of the police.

“With all due respect, Mr. President, the initial briefing you might have been given on the incident might be lacking,” Malayao said on Duterte’s statement that Kho might have acted on instinct of self-preservation.

“For one, various video footage of the incident show that the police vehicle in itself was positioned in an area with much space to maneuver. Yet, PO3 Kho still recklessly driven in reverse and then forwards several times, toppling many unsuspecting protesters who by that time were still reeling from the effects of the tear gas that was just released moments before,” Malayao said.

She said Duterte “really needs to be given a full view of what transpired, as it is apparent that he has been given limited information on the incident.”

“At least, he admitted that he still needed to know what actually transpired. Initially, we are relieved by his pronouncement that he will be meeting with both the police and the demonstrators and personally do the questioning,” Malayao said.

Duterte said he will talk to both sides because there’s no more room for fighting now that his administration is pursuing talks with the Communist-led National Democratic Front of the Philippines (NDFP). “There’s no more Left here, we are talking,” Duterte said.

“I don’t want a quarrel between the police and the militants,” Duterte said, “It’s about time that we treat this with civility, di lang basta hulihin ang pulis, o ang pulis naman, coming in with a swagger, beating people, I don’t want that to happen in my administration,” he said. “I’m praying to God we will succeed in the peace talks,” Duterte said.

“Those are anathema in the modern sense of the word,” he said. “There’s always the right to dissent, that’s part of the territory of democracy,” Duterte added.

“We look forward to sitting down with the President and talk to him about our call for the abrogation of lopsided treaties with the United States, along with the pull-out of US troops and installations in the country, and the call for accountability against the historical injustices perpetrated by US imperialism against the Moros and indigenous peoples—calls that are necessarily connected with his announcement of separation from the US both militarily and economically,” Aba said.

The National Democratic Front in Southern Mindanao said US imperialism and “rabid anti-Duterte clique of the ruling class” were to be blamed for the violent dispersal of the rally.

“Wednesday’s violent dispersal showed only too clearly the extent to which the reactionary state armed forces will employ in order to protect US imperialist interests in the country,” Rubi del Mundo, the NDF Southern Mindanao spokesperson, said in a media statement.

“This recent attack on our national minorities in defense of US imperialism should therefore only strengthen the President’s resolve to abrogate all onerous economic and military agreements with the United States and continue to push for an active and independent foreign policy,” Del Mundo added.

Cop in van who rammed protesters did it before