NCRPO chief to rally cops: We may be wrong, but we’re not bad men | Inquirer News
Close
menu
search

NCRPO chief to rally cops: We may be wrong, but we’re not bad men 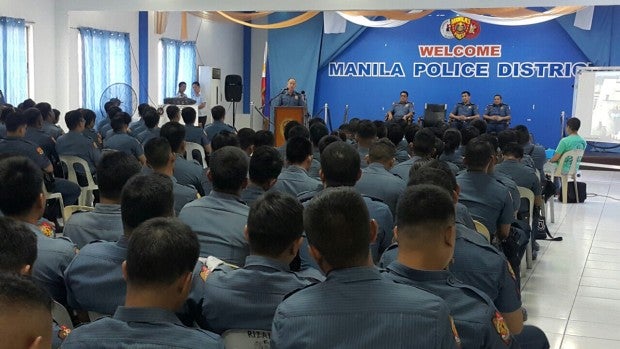 The top cop of the Metro Manila police on Friday went to the Manila Police District headquarters to meet the antiriot cops involved in Wednesday’s violent rally dispersal at the US Embassy and assure them of support from the police leadership.

As if to boost the morale of the beleaguered officers, National Capital Region Police Office (NCRPO) director Chief Supt. Oscar Albayalde, in his message to the MPD officers, said, “sometimes we make bad decisions. But that does not mean that we are bad police officers.”

On Thursday, the Philippine National Police admitted there were lapses in the performance of the duty of the civil disturbance management cops during the dispersal of the ralliers in front of the American Embassy along Roxas Boulevard in Manila last Wednesday.

The Manila police came under fire for displaying violence, despite their duty to exercise maximum tolerance in mass demonstrations, at the dispersal of ralliers. Some Manila cops were seen in different videos assaulting protesters while a police van barrelled through them.

Albayalde told the cops: “We do not agree with any lapses should there be any. However, we also would like to make sure that those who performed their job will be properly acknowledged.”

He also assured the Manila cops they had the NCRPO leadership’s full support.

A total of 60 Manila policemen were relieved of their duties following the incident. Ten officers, including Senior Supt. Marcelino Pedrozo, ground commander, and PO3 Franklin Kho, the driver of the van that ran over the protesters, are under restrictive custody of the NCRPO, while the other 50 are under restrictive custody of the MPD and will not perform civil disturbance management duties while the investigation is ongoing.

“All those relieved from post and all who are under restrictive custody, we implemented this to pave way for the investigation,” Albayalde said.

He told the officers that no matter the outcome of the investigation, they should take responsibility for their actions.

“We take full responsibility of our actions. We have the highest regard for human life. Whatever actions decisions made that day, it is not for us to judge, however, we also do not tolerate wrong actions,” he said.

‘We were provoked’–cops at US Embassy

Police deny running over protesters at US Embassy