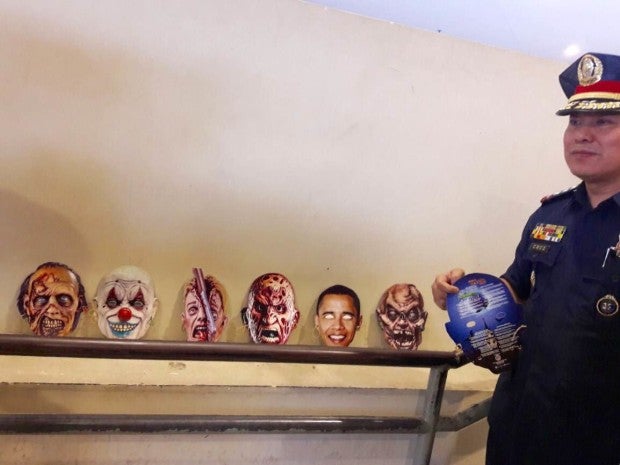 Senior Supt. Gilbert Cruz, chief of the PNP’s Community Relations Group, leads the distribution in Quezon City of Halloween masks including that of US President Barack Obama with crime prevention tips printed at the back. CONTRIBUTED PHOTO

Cops are distributing paper masks of horror characters and United States President Barack Obama to remind the public of safety tips for the upcoming Halloween season.

Members of the Philippine National Police (PNP)’s community relations arm have started handing out horror-themed masks, including that of Obama, with safety tips printed at the back in different establishments and train stations in Metro Manila.

But Senior Supt. Gilbert Cruz, director of the PNP Police Community Relations Group (PCRG), explained that the inclusion of Obama in the police’s Halloween masks was not intended to shame the US commander in chief even after President Duterte’s recent announcement of severing ties with America.

In fact, Cruz said they decided to use Obama masks “in a good way” as it would pique the public’s curiosity. 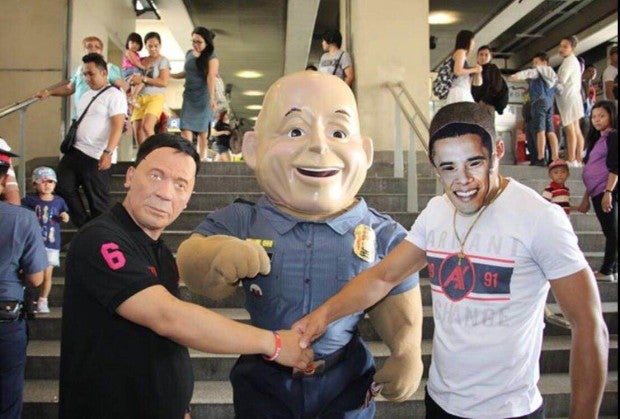 A member of the PNP PCRG wearing a President Rodrigo Duterte mask and an MRT passenger in President Barack Obama mask pose for a photo with PO1 Bato mascot. PHOTO FROM PNP PCRG.

“We’ve been getting many requests to produce Obama masks so I thought, there’s no problem with that. So we used their curiosity to relay our objective of teaching them crime prevention tips,” Cruz said in an interview with INQUIRER.net on Friday.

Cruz, who led the distribution of masks in Quezon City on Thursday, added that they also made a mask of President Rodrigo Duterte, but it was only worn by one of the cops in the group.

Asked how the people reacted upon receiving the spooky masks, Cruz said he was glad none of the masks went straight to the trash.

“Kapag flyers, ‘yung iba tinatapon nila (They just throw away flyers). So ngayon (Now) they keep the masks, they bring it home and give to their children. Ayaw kasi naming masayang ‘yung project namin. Kung anong mas makakapukaw ng atensiyon nila, ‘yun ang gagamitin namin (We don’t want our project to go to waste. We will implement projects that will catch the people’s attention),” he said. IDL/rga