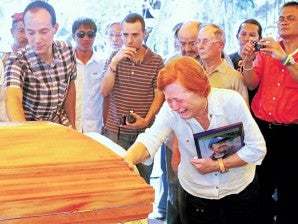 BELOVED FR. POPS A sister-in-law of martyred priest Fausto Tentorio wails her grief at his funeral attended by more than 10,000 people in Kidapawan City, including 88 priests and bishops, and Italian Ambassador Luca Fornari going against his own advisory. KARLOS MANLUPIG / INQUIRER MINDANAO

KIDAPAWAN CITY—The abundant display of love of the Filipino people for Fr. Fausto Tentorio somewhat lightened the grief of his family during the final rites that celebrated his life of dedication to the poor and abandoned.

The slain Italian missionary was escorted Tuesday to his final resting place by an estimated 10,000 mourners, mostly placard-bearing Lumad (indigenous people) and peasants demanding justice for his killing.

The funeral procession wended its way for more than 4 kilometers to the compound of the Bishop’s Residence in Balindog, where Tentorio was buried in a tree-shaded lot next to Fr. Tulio Favali, also of PIME, who was killed by militiamen in 1985.

But the people who had traveled all the way from Arakan, North Cotabato province, of which Tentorio was the parish priest, were disappointed at not being able to deliver the proper tribute for their beloved “Father Pops.” They had arranged for a luksang parangal, but the Kidapawan archdiocese gave them only two hours to deliver their eulogy.

Minutes after the burial, Lumad and farmers blocked the main Cotabato-Davao highway in Balindog to express their grief and anger over Tentorio’s killing on October 17 and that of a farmer two days later.

They said the farmer was killed by soldiers purportedly belonging to the 57th Infantry Battalion.

The protesters briefly maintained the human barricade on the highway, causing traffic to clog starting at about 1 p.m.

Some of the mourners also proceeded to Arakan, where representatives of the militant party-list group Bayan Muna were investigating the killing of the farmer.

At the Mass, Fornari, who had defied his own advisory banning Italian nationals from traveling to Mindanao, expressed indignation over Tentorio’s killing and the prevailing climate of impunity in the Philippines that, he said, allowed the murder of the missionary and indigenous peoples.

He demanded that the government go after and punish Tentorio’s killers, saying: “Only then will the memory of Father Fausto be honored, only then can we continue to serve the indigenous peoples, only then can the quest for equality not be lost but shared with the generations to come.”

In his own message delivered in Italian, Felicci Tentorio thanked all the people of Arakan who had expressed sorrow over the killing of his brother.

“Although we are sad over his sudden death, we are a bit heartened by the show of love of the Filipino people,” Felicci Tentorio said.

He also called on the people of Arakan and Kidapawan to carry on his brother’s work, for which he said he would provide support.

In a message read before the Mass, Zanchi also condemned Tentorio’s killing and called for justice.

He said the diocese was “now soaked with the blood of Father Fausto and Father Tulio.”

Added Kidapawan Bishop Romulo dela Cruz: “Even when peace and justice will finally arrive in Arakan, their memory and martyrdom shall not be forgotten.”

Dela Cruz said the PIME superiors and priests were to meet on Tuesday night to determine who would replace Tentorio as parish priest of Arakan.

He said Fr. Peter Geremia, parish priest of Columbio in Sultan Kudarat, would take over Tentorio’s post as director of the church’s Tribal Filipino Program.

Tentorio was shot dead by an unidentified assailant as he was about to leave the Arakan parish convent. He was 59.

At a forum hosted Tuesday by the Catholic Media Network in Intramuros, Manila, Interior Secretary Jesse Robredo said three angles were being considered as possible motive for the murder.

“It might be good for us to consider all angles and motives because … there are inconsistencies if you take a closer look at the incidents and the initial motive as claimed,” Robredo told reporters.

But he refused to provide details.

Church leaders and many of Tentorio’s coworkers have expressed the belief that he was killed because of his campaign against mining and his programs to uplift the lives of the indigenous people in Arakan.

Suspicions were also aired that Tentorio might have been ordered killed by the military.

Robredo, who was in Arakan last weekend, said the task force assigned to look into the case had completed a sketch that might be of help.

He appealed to the media “to be open” to other information apart from the mining angle.

At the wake of Tentorio last weekend, Robredo told reporters that authorities were not rushing their inquiry into the killing.

“We want to be sure and thorough in the investigation rather than run under a time frame. Authorities are also exhausting all means to give us quality and a better result in their investigation,” he said.

He added that the government would make sure that all available resources would be employed to solve the murder case.

Writing in his blog, “Perspectives,” Cotabato Archbishop Orlando Quevedo said Tentorio was a worthy member of the “noble line of martyrs” in the Church in Mindanao.

Quevedo said Tentorio had “a soft easy smile and a voice that invited conversation.”

“The only enemies he could make are those who wanted to silence his voice appealing for justice and peace for the indigenous peoples and for God’s creation,” the archbishop said, describing Tentorio’s death as “pure murder.”

“If the perpetrators think that his murder would silence priests, religious sisters and brothers, and bishops from proclaiming the justice of God’s kingdom, they are wrong,” said Quevedo, a former president of the Catholic Bishops’ Conference of the Philippines.

“The blood of martyrs like Father Fausto fans the daring and courage of those who care about peace and justice enough to sacrifice themselves while traveling the road of active nonviolence. I strongly appeal to the authorities to search for the perpetrators and bring them to justice,” he said.

Another call for justice

Msgr. Clemente Ignacio, rector of the Minor Basilica of the Black Nazarene in Quiapo, Manila, also described Tentorio as “a martyr.”

An ecumenical Mass was celebrated for Tentorio on Monday night, attended by some 30 priests from various congregations nationwide.

A candle-lighting vigil led by the Promotion of Church People’s Response was also held at Plaza Miranda.

“We, the devotees of the Nazarene, are one with the call for justice for Father Tentorio and all those who have been victimized by violence,” Ignacio said, reading from a statement in Filipino.

He railed against “the structures and institutions that cause the abuse of indigenous peoples and our impoverished countrymen, especially in the use of force by the government to push the interests of a few, or those in power, for their business and wealth.” With reports from Jocelyn R. Uy and Jaymee T. Gamil in Manila; and Dennis Santos, Inquirer Mindanao