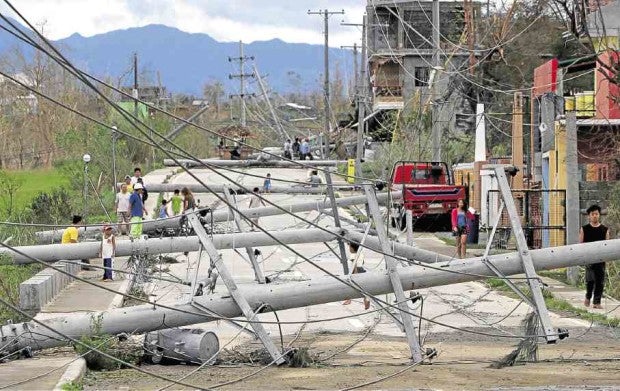 Having lived here all his life, farmer William Buquel, 48, said he assumed Lawin (hawk) would be no different from the other strong typhoons that blew through Cagayan until he saw 315-kilometer-per-hour (kph) winds uproot trees and power lines, and pry open roofs on Wednesday night and Thursday morning.

“To my recollection, [Typhoon] ‘Seniang’ in 1973 was the worst. But it was nothing compared with Lawin. It was my first time to see a whole roof flying,” he said.

Lawin hit coastal towns facing the Pacific Ocean with sustained winds of 225 kph and gusts of up to 315 kph. It weakened overnight as it rammed into giant mountain ranges. By morning, a picture was emerging of large-scale destruction.

Across a city road, for instance, a whole roof was detached from a school building and dangled precariously from tree branches.

“In my age, I’m 60 years old, this is the strongest typhoon I have ever seen,” village councilor Willie Cabalteja said in Vigan City in Ilocos Sur province.

“We haven’t slept. Trees were forced down, houses lost their roofs, and fences and metal sheets were flying around all night,” Cabalteja said.

A university teacher in Ilagan City, Isabela, said many houses were destroyed.

“I saw one school building crushed under a large tree … it was as if our house was being pulled from its foundations,” the teacher said.

He said rice and corn plants as far as the eye could see were flattened.

As of 5:30 p.m. Thursday, the National Disaster Risk Reduction and Management Council (NDRRMC) tallied eight deaths—four in the Cordillera Administrative Region, three in Cagayan Valley, and one in Central Luzon. Two people in Cagayan Valley were reported missing.

Five people, among them a baby, were killed in Benguet and Isabela provinces on Wednesday night, according to reports reaching the Inquirer.

Jhon Carlos Hatop, who was born three weeks ago, was killed in a landslide in Kibungan town in Benguet, along with Joshua Hella, 19, and Jessie Hella, 28. A landslide in Buguias town, also in Benguet, killed Arsenio Lantaen, 65.

In Isabela, Jose Malenab, 70, of Sto. Tomas town died from an apparent heart attack at an evacuation center. Two fatalities were reported in Hungduan town in Ifugao province.

As they waited for the winds to subside, Tuguegarao residents began clearing their areas of debris while others exchanged stories on how they survived.

Nico Deyra, 27, said his sari-sari store in Camasi village was wrecked by the winds. “I know the forecast was Lawin would be strong. It was really frightening,” he said.

In Ilagan City in Isabela, Amy Querubin of Barangay Sta. Barbara said the whistling sound by Lawin as it crossed Isabela was so ominous “it made us pray and seek God’s mercy last night.”

Enrico Gangan of Barangay Centro woke up early to gather remnants of his roof, hoping to repair them. “People will grow poorer again because of this calamity,” he said.

Motorists headed for Cagayan Valley were stranded on Thursday due to landslides along a section of the highway in Carranglan town in Nueva Ecija province.

Cagayan Gov. Manuel Mamba said clearing the roads was a top priority to allow the delivery of relief goods to the hardest-hit areas in Tuguegarao and the towns of Peñablanca, Enrile, Iguig, Amulung, Solana, Piat, Tuao and Rizal.

Isabela and Baguio City suffered a massive blackout on Wednesday night and Thursday morning. But power was restored later in some areas in Baguio. Burnham Lake overflowed.

The highest accumulated rainfall in the country from 8 a.m. on Oct. 19 to 8 a.m. on Oct. 24 was in Baguio and Tuguegarao, according to weather forecaster Aldczar Aurelio.

In Mountain Province, the swollen Chico River carried away portions of the Samoki bridge, causing a span of the bridge to sink. The bridge links the capital town of Bontoc to Banaue town in Ifugao.

Landslides closed seven roads, including a section of the Halsema Highway, the access road to interior Cordillera.

Lawin damaged crops meant for harvest, so the Ilocos Norte government announced it might declare a state of calamity.

In Pangasinan province, swollen rivers traversing the towns of Pozorrubio, Calasiao and Sta. Barbara flooded villages along their banks. Twelve villages in Dagupan City were also flooded due to storm surges.

In La Union province, the typhoon damaged P15 million worth of crops. The provincial government evacuated 1,581 families. Flooding also affected the towns of Luna and Naguilian and San Fernando City, while a landslide blocked the Naguilian-Bagulin Road. Bangar town was placed under a state of calamity.

More than 15,300 people, most of whom were staying in 136 evacuation centers, were displaced, according to NDRRMC spokesperson Romina Marasigan.

At least 12 domestic flights were grounded on Thursday amid the bad weather.

Lawin was downgraded into a typhoon early on Thursday hours after it made landfall in Cagayan on Wednesday evening. It continued to weaken as it crossed the landmass of northern Luzon. As of 4 p.m. on Thursday, it was packing maximum sustained winds of 130 kph near the center and gusts of 160 kph.

Lawin was already out of the Philippine area of responsibility as of 5 p.m. on Thursday. —WITH REPORTS FROM CYNTHIA D. BALANA, JAYMEE T. GAMIL, JEANNETTE I. ANDRADE, IN MANILA; VILLAMOR VISAYA JR., LEILANIE  ADRIANO, ARMAND GALANG, GABRIEL CARDINOZA, VINCENT CABREZA, AP AND AFP

IN PHOTOS: ‘Lawin’ aftermath in Cagayan