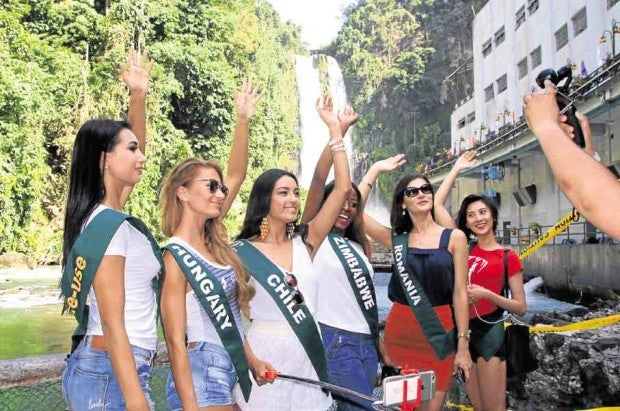 Candidates of the Miss Earth beauty pageant pose for photographers with the Maria Cristina Falls, a main tourist attraction in Iligan City but part of a hydropower facility, in the background. —RICHEL UMEL

Access by the public to the two tourism destinations was cut off in September amid threats of terror attacks by the Maute Group, a ragtag band of extremists who swore allegiance to the international terror network Islamic State of Iraq and Syria (IS).

Prior to visiting Maria Cristina Falls and Nature’s Park, which were accessible only through the hydropower plants Agus 6 and 7, the candidates were welcomed by acting Mayor Jemar Vera Cruz at the St. Michael’s College Hotel and Restaurant Management building and were treated to lunch.

Candidate Burton, in a statement, urged Filipinos to “take action and change climate change amid disasters being reported elsewhere due to global warming.”

“I have seen Mother Earth crying when one of the places in England was hit by a flash flood and heavy rains brought about by tremendous and devastating hurricane,” Burton said.

“While I’m here, I’ve heard more typhoons, rains and hurricanes are coming. Our Mother Earth is crying,” she said.

Miss Romania, Denmark and Iraq said it was time for people to respect Mother Earth to prevent further devastation.

The Miss Earth beauties later joined a mangrove tree planting activity on Bayug Island, one of the areas hardest hit when Tropical Storm Sendong (Washi) made landfall in Northern Mindanao and flooded many areas  between Dec. 13-19, 2011.

More than 1,000 people were killed here and in other areas of Northern Mindanao and close to 1,000 people remained missing to this day.

The Miss Earth contestants will be staying here until Friday. —RICHEL UMEL