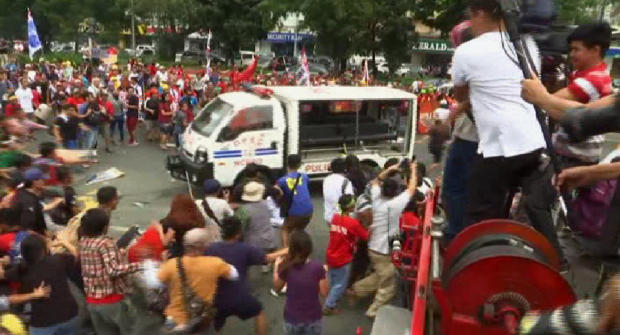 A police patrol car goes berserk as it plows through protesters, running over some of them, at a rally outside the US Embassy in Manila on Oct. 19. AP VIDEO SCREEN GRAB

Police Officer 3 Franklin Kho, the driver of the police van that hit and ran over several protesters in a rally dispersal, has a clean record as a policeman, according to the chief of the Manila Police District (MPD).

Asked if they had conducted a background check on the erring policeman, MPD director Senior Supt. Joel Coronel on Thursday said based on their records, Kho had outstanding behavior while in service and had no pending administrative or criminal charges.

“Based on our records and personal file, he’s of good moral character. He had outstanding behavior. He has no administrative or criminal cases so far,” Coronel said in a press conference at Camp Crame a day after the bloody dispersal of militant ralliers in front of the US Embassy in Manila.

Kho was driving the van that plowed through several protesters, at one point running over at least two persons, as it sprinted back and forth about 20 meters into the crowd.

He was relieved from his post and placed under restrictive custody in the National Capital Region Police Office at Camp Bagong Diwa in Taguig City along with eight other MPD officers, including Senior Supt. Marcelino Pedrozo, the ground commander at the rally.

A video of an officer pulling the hair of a lumad inside a jeepney during the dispersal has gone viral. When the police officer saw a person taking shots of the incident, he also assaulted the videographer.

The media network Altermidya uploaded the video and identified the officer who assaulted the lumad and the videographer as Kho. The officer in the video wore an MPD uniform with the PO3 rank insignia.

Read Next
Political rift may be behind Barbers-Pichay spat
EDITORS' PICK
Look Through: Super Typhoon Karding barrels through parts of Philippines
Motorcycles, smartphones, and cash prizes up for grabs in TNT’s ‘Tuloy Ang Saya’ Raffle in Mindanao
Do all the things you do, faster
POGOs not linked to Illegal online gaming, says Pagcor
House energy committee chair Arroyo bats for cheap electricity
Metro Manila now at moderate risk for COVID-19 — DOH
MOST READ
Robredo supporter tackles elephant in room: No massive fraud in 2022 polls, surveys were just right
Comelec invalidates win of sitting governor in Negros Oriental
DepEd: We are in a crisis situation in education sector
Lives destroyed as armyworms invade Philippine ‘onion capital’
Don't miss out on the latest news and information.