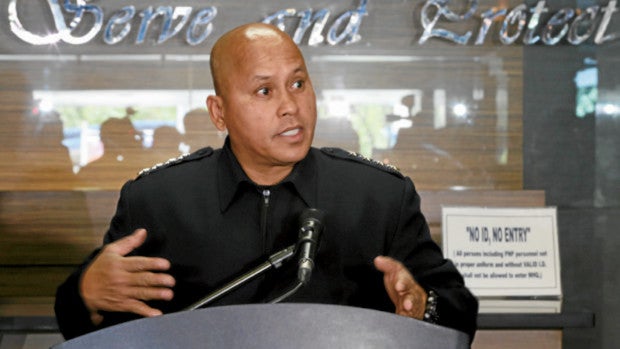 The chief of the Philippine National Police (PNP) on Thursday said he felt sad and angry upon seeing the actuations of the anti-riot police who led the bloody dispersal of militants during a rally in front of the US Embassy, promising to investigate the incident fairly.

PNP spokesperson Senior Supt. Dionardo Carlos read Dela Rosa’s message in a press conference at Camp Crame. The police chief is currently in China along with President Rodrigo Duterte and other Philippine delegates for an official trip.

“But I cannot let emotions get the best of me. As Chief of the PNP, I have a duty and moral obligation to look into this squarely, and deal with it swiftly and decisively,” Dela Rosa added.

“The Philippine National Police (PNP) recognizes and upholds the citizens’ right to peaceful assembly. Police forces are under strict instructions as a matter of policy, to exercise maximum tolerance in such public assemblies, with public safety and protection of human life an utmost concern and topmost priority,” he said.

The police chief said he has told President Duterte about the incident.

“The President has been briefed about the incident and he stressed on the obligations of our police to serve and protect the people. But as he said, we cannot point fingers right away without clear investigation. Our other priority now, is to look into the victims, and check on their recovery and safety after such an unfortunate incident,” he said.

Dela Rosa said he had instructed Chief Supt. Oscar Albayalde of the National Capital Region Police Office (NCRPO) to place all officers involved in the riot under administrative relief to “ensure utmost impartiality of the investigation.”

“With what transpired at Roxas Boulevard in Ermita, Manila yesterday, an investigation and full review is underway and necessary sanctions will be levied on any personnel guilty for putting lives at risk,” Dela Rosa said.

Nine personnel of the Manila Police District (MPD) have been removed from their posts, including Senior Supt. Marcelino Pedrozo, the ground commander at the rally who allegedly ordered the violent dispersal, and PO3 Franklin Kho, the driver of the police van that ran over several protesters.

The nine officers will temporarily report to the NCRPO’s personnel holding and accounting unit.