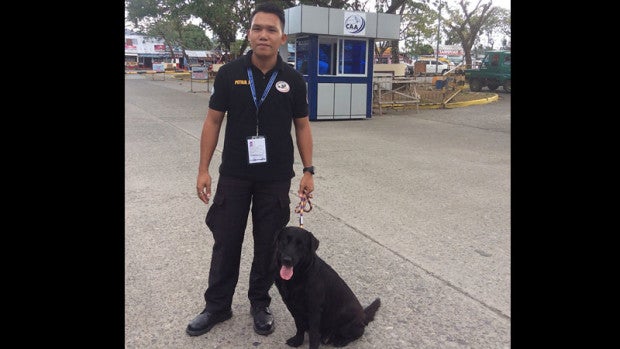 A bomb-sniffing dogposes with her handler at Butuan-Bancasi Airport in Agusan del Norte province. Bomb-sniffing dogs and security forces sprang into action Thursday morning responding to a bomb threat on a Philippine Airlines flight from the US. CONTRIBUTED PHOTO

Bomb-sniffing dogs and security personnel swept through a Philippine Airlines (PAL) flight from the US on Thursday morning after someone wrote a bomb threat in the plane’s lavatory.

As soon as PAL flight PR 103 from Los Angeles landed at the Ninoy Aquino International Airport (NAIA) Terminal 1 at around 5 a.m., teams of the Aviation Security Group (Avsegrp) special operations unit and K9 were already on standby.

According to an Avsegrp report, they initially received information from the air control tower about a “bomb threat written on the lavatory of PAL flight PR 103.”

“Personnel of this station immediately alerted … personnel of SOU and K9 to respond upon the arrival of said aircraft,” the report said.

The police teams immediately conducted paneling, bomb detection operations, on the aircraft as soon as it was cleared of passengers.

All passenger baggage was unloaded on the ramp, where bomb-sniffing dogs went through each searching for explosives.

No bomb was found and the threat was declared a hoax at about 7 a.m. CBB