Bulusan spews ash for 2nd time in a week 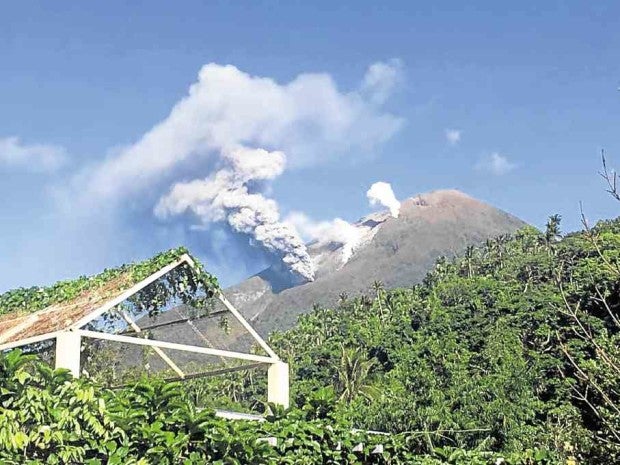 LEGAZPI CITY—For the second time this week, Mt. Bulusan in Sorsogon province spewed ash on Wednesday but government volcanologists said there is no cause for alarm.

A bulletin released by the Philippine Institute of Volcanolgy and Seismology (Phivolcs) on Wednesday said a minor phreatic (steam-driven) explosion occurred at 4:58 a.m. from vents on Bulusan’s southeastern upper slope. The explosion generated a kilometer-high ash column and lasted for nine minutes.

Crispulo Deolata, Phivolcs volcanologist based in Sorsogon, said ash from the explosion drifted toward villages near the volcano’s slopes in Bulusan and Irosin towns.

The steam-driven explosion came two days after a minor eruption in Bulusan on Monday. Wednesday’s event was the third this month.

Ed Laguerta, Phivolcs resident volcanologist based in this city in Albay province, said this type of eruption has been a “normal occurrence” in Bulusan.

“What we are closely checking is the presence of fresh magma expelled by the volcano, indicating that magma is developing beneath the vent,” he said. —WITH A REPORT FROM REY ANTHONY OSTRIA

Read Next
Loyalists end 4-day caravan on a sad note
EDITORS' PICK
Beyond the Chocolate Hills: A farm-to-table, heritage culinary adventure of Bohol
MyCitiHomes premiers PH’s first 3-star certified BERDE District residential development
‘Crash Landing on You’ couple confirms pregnancy
Enrile contracts COVID-19: ‘To my critics and enemies, I am not going to die yet’
Metro Manila’s COVID-19 positivity rate jumps from 3.9% to 5.9% — OCTA
House energy committee chair Arroyo bats for cheap electricity
MOST READ
Enrile contracts COVID and snipes at critics, foes: ‘I am not going to die yet’
Duterte: It was correct for Bongbong Marcos to ‘decline’ presidential debates
Russia steps up missile strikes on Ukraine as G7 leaders gather
PH firm partners with US corporation to set up weapons assembly in Bataan
Don't miss out on the latest news and information.