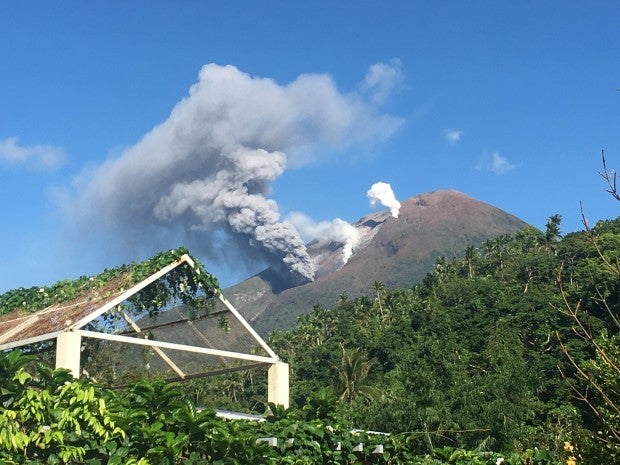 A bulletin released by Phivolcs at 8 a.m. showed that the minor phreatic (steam-driven) explosion occurred at 4:58 a.m. from the vents on its southeastern upper slope.

The ashfall drifted toward the villages near the slopes of the volcano in the town of Bulusan, said Crispulo Deolata, Phivolcs resident volcanologist based in Sorsogon.

Ed Laguerta, Phivolcs resident volcanologist, said the steam-driven eruption was the second this week, following a minor eruption on Monday. Wednesday’s event was the third recorded this month.

He said this type of eruption has been a “normal occurrence” in Bulusan. Phivolcs, he said, has recorded at least 20 eruptions since May last year.

“What we are closely checking is the presence of fresh magma expelled by the volcano, indicating that magma is developing beneath the vent,” he said.

Laguerta said the earthquakes were triggered by rock fracturing when hydrothermal pressure develops in the volcano’s vent, he said.

Alert Level 1 (abnormal) remains in effect over Mount Bulusan. No evacuation of residents in communities around the volcano had been ordered by local authorities.

Phivolcs said residents and visitors should not enter the 4-kilometer permanent danger zone (PDZ) around the volcano due to the possibility of sudden and hazardous steam driven eruptions.

Civil aviation authorities also advised pilots to avoid flying close to the volcano’s summit as ash could be hazardous to aircraft. CDG