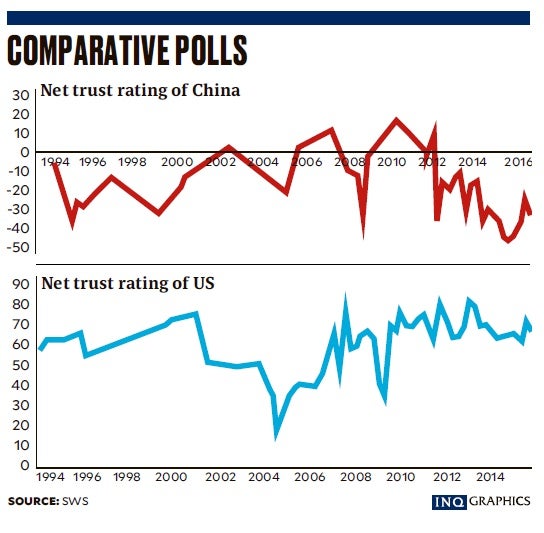 But Filipinos still trust the United States far more than China, an opinion poll showed on Tuesday, despite Mr. Duterte’s recent outburst of anti-American rhetoric and his sudden overtures toward old rival Beijing.

The visit by Mr. Duterte, who was due to arrive in Beijing on Tuesday night, will be a step toward ending years of estrangement between the countries, according to state-run Xinhua news agency.

“Should he demonstrate his good faith, the trip will present a long overdue opportunity for the two nations, which enjoy longstanding friendship, to heal the wounds of the past few years and steer their relationship back to the right course,” Xinhua said in a commentary.

A Social Weather Stations poll from Sept. 24 to 27 showed 55 percent of Filipinos had “little trust” in China, versus 11 percent who had doubts about the United States.

Just over three-quarters, or 76 percent, of the 1,200 respondents had “much trust” in the United States, compared with 22 percent who felt the same about China. The poll did not ask respondents to explain their views.

Mr. Duterte’s visit will help define how far he wants to shift allegiance from the United States to an Asian superpower locked in a territorial standoff with his small, impoverished country, and the Philippines’ 65-year alliance with the United States, a key pillar of US President Barack Obama’s rebalance to Asia, could hang in the balance.

The Xinhua editorial signals how China hopes to use the visit to regain lost ground in a Southeast Asian nation that won a major arbitration lawsuit against Beijing’s massive territorial claims in the South China Sea just three months ago.

China refused to take part in the litigation or accept the ruling, which said China’s historical claim to virtually the entire strategic water body wasn’t supported by international law.

“The verdict issued by a law-abusing tribunal has no place in the negotiations at all,” Xinhua said.

Mr. Duterte is scheduled to meet with Chinese President Xi Jinping and other officials on Thursday.

A Philippine draft of a proposed joint statement touches on the restoration of permits for Filipino agricultural exports, China’s support for Mr. Duterte’s campaign against illegal drugs, boosting tourism and enhancing Coast Guard cooperation to avoid misunderstandings at sea.

Details are still being worked out, officials say, and it remains unclear whether the thorny issue of the South China Sea territorial disputes will be reflected in the statement.

China was to offer “assistance in personnel training and donation of equipment to aid in the fight against illegal drugs,” said the Philippine draft seen by The Associated Press (AP).

Mr. Duterte’s deadly battle against drug dealers and abusers has been a defining issue of his political career, prompting him to lash out at Obama and other foreign critics and further propelling him toward rapprochement with an uncritical Beijing. —REPORTS FROM THE WIRES

Read Next
IN THE KNOW: Best, worst airports in Asia
EDITORS' PICK
Smart celebrates all kinds of ‘#SimplyLove’ for Pride Month
Duterte to issue memo on face shields this week
Smart brings KCON:TACT especially 4U to subscribers from June 19 to 27
Gilas out to prove Korea win not a fluke; Tab fires back at ‘lucky shot’ remark
DOH reports 40 more COVID-19 variant cases
Young, Huerter help Hawks upset top seed Sixers in Game 7
MOST READ
Duterte to issue memo on face shields this week
No plot to oust Pacquiao as PDP-Laban president in July meeting — Nograles
Probe troll farms, lawmakers urge
PAL to ax some long-haul flights to slow bleeding
Don't miss out on the latest news and information.