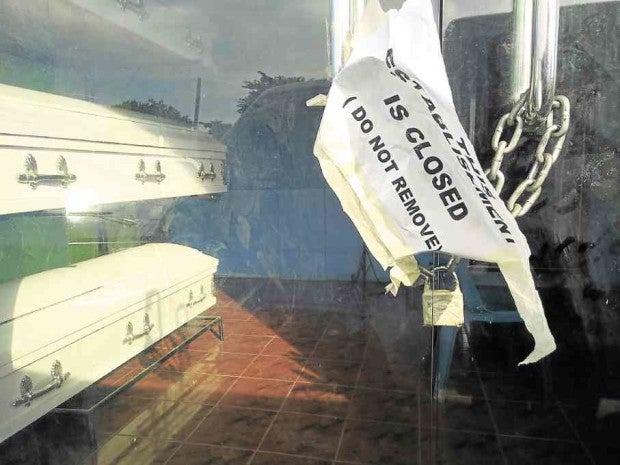 After a surprise inspection led to a horrifying find, Henry Memorial Services was shut down for good on Tuesday. —Jhesset O. Enano

A surprise inspection on Tuesday at a funeral home on A. Bonifacio Avenue in Quezon City, revealed an unexpected, stomach-turning secret: Over 100 cadavers rotting in body bags and coffins at the establishment whose permit to operate had allegedly long expired.

City hall officials were shocked when they found around 120 bodies of men, women and children in varying stages of decomposition stocked in different rooms at Henry Memorial Services in La Loma, located across Manila North Cemetery.

Even a block away from the funeral home which was situated in a residential area, the stench of decay was overpowering and nauseating, especially when the wind blew, forcing residents to wear face masks.

Even the city hall officials came with their own face masks but were unprepared when they found the bodies strewn inside the establishment. Not only did they have to avoid stepping on the bodies, they also had to watch out for flies as well as rats and huge cockroaches racing across the floor.

On Sept. 23, the City Health Department issued a cease and desist order after the funeral home owner, Oscar Parales, failed to secure the necessary sanitary and health permits.

The order, however, went unheeded as health officials started getting complaints from residents in the area about the overpowering stench coming from the establishment.

Blanquita Angeles, 63, said that last month, their neighborhood started to smell strongly of formalin. Her house is located on the next block.

“It smelled like mint but when it goes down your throat and chest, it’s incredibly painful,” she told the Inquirer. When she confronted funeral home manager Severino Mancia, she was told that the morgue’s roof needed fixing and the smell would go away after.

But the stench became more nauseating and Angeles’ three young grandchildren came down with pulmonary diseases, prompting her to start a petition for city officials to conduct an inspection.

“There have been reports that Henry Memorial Services has been taking in bodies from other morgues for safekeeping,” said civil registrar Ramon Matabang whose office took part in the raid.

He added that they did not find any death certificates, leading to more questions about the identities of the bodies.

According to him, they were also looking into reports that the establishment has been operating without a business permit for the past three years.

During the raid, Parales was nowhere to be found while Mancia refused to answer any questions, Matabang said. The civil registry is now working with the city legal department on filing appropriate charges against the two for violation of the health and sanitary code.

SPO2 Ramwil Relox, chief investigator of the La Loma police, said that it would be hard to determine if the unclaimed bodies were victims of extrajudicial killings.

“It is hard to speculate especially since some of the bodies have reportedly been there for a long time,” he told the Inquirer.

City health officer Dr. Verdades Linga pushed for an immediate burial, saying there was a risk of a public health epidemic if the bodies were not disposed of within 48 hours.

The place was disinfected on Tuesday afternoon and a priest blessed the bodies which were moved to the morgue. A mass burial is set this morning at a public cemetery in Novaliches.