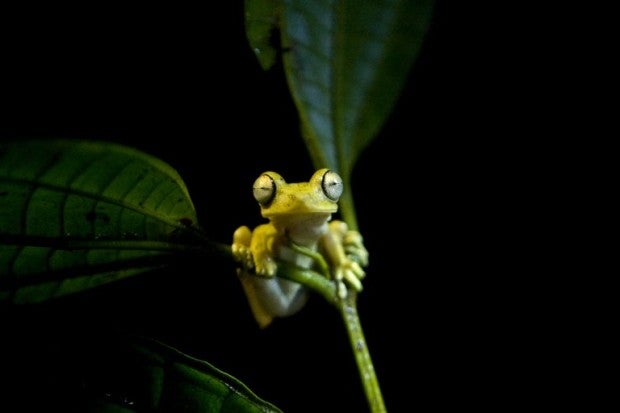 Image of a frog taken at the Camisea jungle in Cuzco, Peru on june 2, 2009. Climate change, deforestation and illegal mining jeopardize to the point of endangering several species of animals in Peru, including turtles, crocodiles, birds, frogs and monkeys, according to the Agriculture Ministry. AFP FILE

LIMA, Peru — Peru is investigating what killed some 10,000 Titicaca water frogs, a critically endangered species affectionately known as the “scrotum frog,” in a river that is feared to be polluted, authorities said Monday.

Hundreds of the large, wrinkly green frogs have been found floating on the surface of the Coata river in southern Peru in recent days, prompting the National Forestry and Wildlife Service (Serfor) to launch an investigation.

“Based on local residents’ statements and samples taken in the days after the incident, it is believed that more than 10,000 frogs were affected over about 50 kilometers (30 miles),” Serfor said in a statement.

The alert was sounded by an environmental group called the Committee Against the Pollution of the Coata River, which accused the authorities of ignoring the river’s severe pollution.

The species is classified as critically endangered by the International Union for Conservation of Nature, which says the population is estimated to have declined by 80 percent in the past 15 years.

To protest, its supporters brought 100 of the dead frogs to the central square in the regional capital, Puno.

Protest leader Maruja Inquilla urged the authorities to take the dead frogs as a wake-up call.

“I’ve had to bring them the dead frogs. The authorities don’t realize how we’re living. They have no idea how major the pollution is. The situation is maddening,” said Inquilla.

“Why is the state so apathetic? We need a sewage treatment plant now.”

The frogs live only in Lake Titicaca, South America’s largest lake, and its tributaries.

Known officially as Telmatobius culeus, they got their nickname from their many folds of skin, which help them breathe in their high-altitude habitat in the Andes mountains.

The species is classified as critically endangered by the International Union for Conservation of Nature, which says the population is estimated to have declined by 80 percent in the past 15 years. CBB