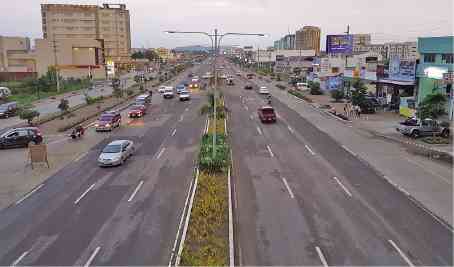 ILOILO CITY—While other highly urbanized areas, like Metro Manila and Metro Cebu, are up to their necks with complaints from motorists about road congestion, this city is grappling with a different problem caused by new and wider roads—speeding.

Massive infrastructure projects have turned the city into what could be a model of how to ease road traffic.

Most of the new and wider roads were projects under former President Benigno Aquino III. The upgrade and repair of roads, however, were continued by the Duterte administration.

Although the infrastructure solution to road congestion may not be possible in other urban jungles, where there’s no more space to build, this city’s experience with it offers one of the clearest way out of street chaos that had built up for so many reasons, among them lack of foresight.

The projects have brought more and wider roads in the city, vastly improving access and reducing travel time.

But calls to strictly implement speed limits have risen amid fatal accidents believed to be caused by speeding.

On Saturday, 19-year-old student Chester Lane Go died after a Hyundai Genesis sports car crashed into the center island of the road and turned turtle along the Senator Benigno Aquino Jr. Avenue.

Rescuers had to cut the car’s roof to extract Go who was in the front passenger seat. The driver, John Trevor Galindez, suffered cuts and bruises.

Witnesses said the vehicle was moving fast before it went out of control.

Councilor Joshua Alim used the fatal crash to push for the full enforcement of an ordinance, which sets speed limits in the city and which he authored.

The ordinance, however, has yet to be enforced although it had been passed on June 2, 2015.

The local law sets speed limits for different vehicle types on select roads in the city.

On Senator Benigno Aquino Jr. Avenue, maximum speed for cars and motorcycles is 60 kph. The speed limit for trucks on the same stretch of road is 50 kph.

On other major streets, speed limit is 40 kph for cars and motorcycles and 30 kph for trucks and buses.

The Senator Benigno Aquino Jr. Avenue is a main road stretching 15.6 km from General Luna Street in the city to the Iloilo International Airport in Cabatuan town.

A portion of the avenue, Iloilo-Jaro Diversion Road, spans 5.84 km and has eight lanes for motor vehicles and a lane each for bicycles and pedestrians.

The road has very light traffic especially at night.

Lawyer Mark Piad, spokesperson of Mayor Jed Patrick Mabilog, said the speed limit ordinance cannot be fully enforced due to lack of speed guns and other gadgets to measure the speed of vehicles.

He said the city government is evaluating proposals to implement an integrated traffic system to include installation of close circuit television cameras and speedometers.

The project, estimated to cost at least P100 million, would be implemented in stages.

In the meantime, Piad said he is appealing to drivers to “ensure the safety of everyone by driving within the speed limit.”