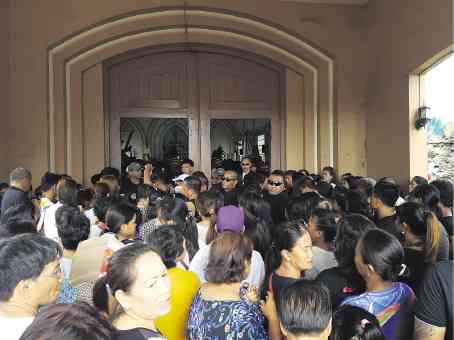 ILOILO CITY—Eliseo Rubinas, a resident of Barangay Tanza-Esperanza for 40 years, said he feels safer in his village now.

“There were a lot of strangers coming and going here before. Now, I’m not anxious at night and don’t have to worry about the children,” Rubinas, 69, said at the sidelines of a barangay assembly here on Sunday.

“The selling of illegal drugs has gone down significantly. That is good for us,” Rubinas, who  earns a living repairing shoes, said in Hiligaynon.

He said the drug trade in the village has also declined after the killing of suspected drug lord Melvin Odicta and his wife, Meriam.

A lone gunman shot and killed the couple on Aug. 29, a few minutes after they disembarked from a ship at the Caticlan port in Malay town in Aklan province. Police believed the atttack was related to illegal drugs.

The couple’s residential compound straddles the villages of Tanza-Esperanza and Malipayon here.

“Many of those who sold drugs did so because of poverty and lack of opportunity,” he said.

“Many were afraid to tell on their neighbors. But when (Odicta) died, drug pushers lied low or left, maybe because of fear [that they will become the next target],” he said.

Tanza-Experanza is among villages in Iloilo City where drug pushers, particularly those selling “shabu” (methamphetamine hydrochloride), ply their trade. The village has been likened to a “mall” because of drug dens that line the narrow and crisscrossing alleys in the 6-hectare village.

Village officials have been campaigning among residents to drive the illegal drug trade out of their village and cleanse their image as a community.

The barangay council launched the “Hublag sa Pagbag-o” (Movement for Change) in a barangay assembly last week to involve residents in the campaign against illegal drugs.

He admitted he had to counter doubts on his campaign, being the brother of the slain suspected drug lord.

“My brother and his wife are dead. We have to move on,” he told the Inquirer.

The village has implemented a curfew of 6 p.m. for children and 10 p.m. for adults who are nonresidents.