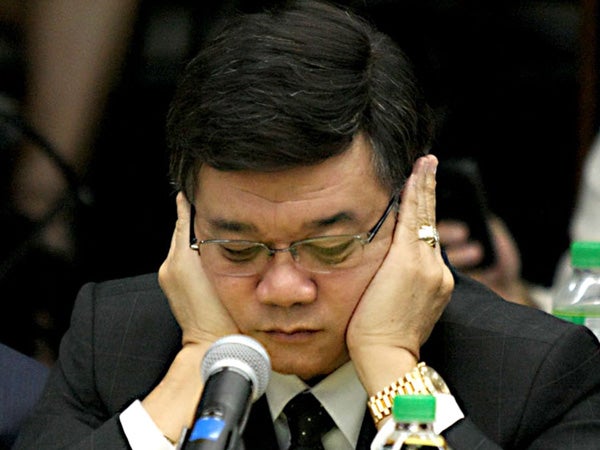 Aguirre caught the public’s attention after he was berated and cited for contempt by the late Sen. Miriam Defensor Santiago during the impeachment proceedings against then Chief Justice Renato Corona in 2012.  Aguirre was a member of the prosecution, and the feisty senator went off the handle when they dropped five of the seven articles of impeachment.

Santiago branded Aguirre’s gesture  an “intergalactic act of epal” but the man who would later become President Duterte’s chief legal enforcer in his antidrug war stood his ground. A contrite Aguirre later apologized to the senator.

Now, he has been dubbed the “master of fakery” by arch nemesis, Sen. Leila De Lima, who has denounced Aguirre’s recent attacks against her at a congressional inquiry.

Aguirre was born on Oct. 16, 1946, in the town of Mulanay, Quezon province,  where his father was a former town mayor. At an early age, he showed signs of brilliance and was a consistent honor student, graduating on top of his class at  Mulanay Elementary School.

As a young lawyer, he joined young activists who fought the Marcos dictatorship. He went into hiding for five years after being charged with inciting to sedition until the case against him was dropped.

He later campaigned for the late President Corazon Aquino during the 1986 snap elections. In 2010, he supported the entire Liberal Party ticket of her son, former President Benigno Aquino III.

A seasoned lawyer with almost 40 years of experience under his belt, Aguirre represented Hubert Webb in the celebrated Vizconde massacre case. He also became the defense counsel of Supreme Court Associate Justice Bienvenido Reyes in an administrative case.

His former clients include a venerable who’s who in local politics, from Sen. Panfilo Lacson and President Duterte to columnist Ramon Tulfo and Afgani V. Alonto, who was accused of plotting to assassinate former President Gloria Macapagal-Arroyo.

Aguirre crossed paths with Sen. Antonio Trillanes IV when he served as deputy counsel of the Feliciano Commission that conducted a probe on the Oakwood mutiny. Trillanes was formerly a junior Navy officer and the spokesperson of a group of young officers who took over the luxury apartment hotel in Makati demanding reforms at the corruption-laden Armed Forces.

But it was in 2012 that he burst onto the national consciousness as among the private prosecutors in the case against Corona, who became the first head of the judiciary impeached by the Senate for alleged corruption.

Aguirre said he and the rest of the Lex Talionis Fraternity pushed for President Duterte’s candidacy, and even donated their own monies to fund his campaign.

Days after the vote, he said President Duterte surprised him by joking he should hire more brilliant lawyers at the Department of Justice (DOJ).

“What I did, I stood up, I thanked him, shook his hands and told him, ‘thank you, Mr. President,” Aguirre said laughing. “I never expected that he is serious in appointing me [as justice secretary].”

Aguirre said President Duterte told him to focus on illegal drugs, graft and corruption and heinous crimes, and file appropriate charges “no matter who gets hurt.”

“There should be no selective justice,” Aguirre said.

He said De Lima’s name was only incidental to the investigation on the proliferation of illegal drug trade inside the New Bilibid Prison (NBP).

He said even before he formally took office,  he already interviewed former and current officials of the Bureau of Corrections (BuCor) to determine the problems of the agency. BuCor is one of the many agencies under the DOJ, and to him the “dirtiest.”

Under the BuCor are seven national penitentiaries including the controversial NBP.

The NBP is the source of 75 percent of drug transactions in the country, according to the Philippine National Police.

“We are not just concentrating on De Lima. What we want is to clean up Bilibid,” Aguirre said this week.

Aguirre explained that during the course of the investigation, names of those remiss with their duties that led to the “booming” narcotics trade in prison naturally had to come out. Apart from De Lima, he blamed former BuCor Director Franklin Jesus Bucayu and former officer in charge Rafael Ragos for the expansion of the drug trade.

De Lima, who also graduated law at San Beda,  is Duterte’s staunchest critic. The President, on the other hand, accused De Lima of receiving cash from drug lords to fund her successful campaign.

De Lima in turn accused the President and Aguirre of attacking her to avenge a Senate probe where one witness had directly implicated Mr. Duterte in vigilante killings when he was still a mayor. She has since been removed as head of the inquiry in the Senate led by Duterte’s allies.

Aguirre then appeared before a hearing at the Lower House where he trotted out several convicts who testified they gave millions in funds to De Lima, a move that he said was not endorsed by Mr. Duterte.

He also denied De Lima’s claim that witnesses, including the inmates who testified against her, were tortured, pressured or coerced, and the bank documents were falsified.

“I may be losing my hair but she [De Lima] is losing her mind,” Aguirre said. “I will never manufacture evidence. I have been practicing for so long, I have never and will never be part of any kind of manufacturing of evidence.”

He said he was hoping to file a case against De Lima by the year’s end.

He said the public probably thought he was just focusing on the Bilibid drug case, but in truth, the DOJ was brimming with cases but lacked the manpower to pursue them.

Aguirre said they have a shortfall of 500 prosecutors nationwide, stressing that only 42 percent of prosecutorial positions have been filled up so far. Currently, there are more than 10,000 backlog of cases.

To beef up the ranks, the justice chief said he was also pushing for a DOJ Academy, similar to the Philippine Judicial Academy (PhilJa).

“The DOJ  will play a great part in the President’s effort to have a crime-free Philippines but great powers come with great responsibility,” Aguirre said. “We have to see to it that they believe in our prosecutors.”

“For justice to work, we have to work. For the people to believe, we have to see to it that they can believe in our prosecutors,” he said.