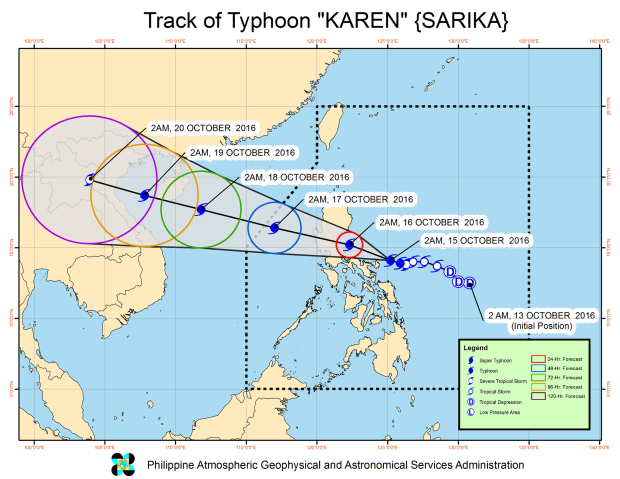 It its 5 a.m. bulletin, the Philippine Atmospheric Geophysical and Astronomical Services Administration (Pagasa) said the eye or center of the storm is spotted at around 4 a.m. at 125 km northeast of Virac, Catanduanes.

It has sustained winds of up to 130 kph near the center and gustiness of up to 180 kph, Pagasa added.

The estimated rainfall amount is from moderate to heavy within the 500 km diameter of the typhoon.

Pagasa said it is expected to pass close to Polillo Island Sunday early morning and make landfall over the Quezon-Aurora area later before noon.

Signal number 2 is up in Camarines Norte, Camarines Sur, Aurora and Northern Quezon including Polillo Island.

Signal number 1 is up in the following provinces in Luzon:

In the Visayas, it’s only Northern Samar.

Rainfall advisory in Mindanao has been terminated as of posting.

The next weather advisory will be issued at 11 a.m., Pagasa said. Totel V. de Jesus, INQUIRER.net