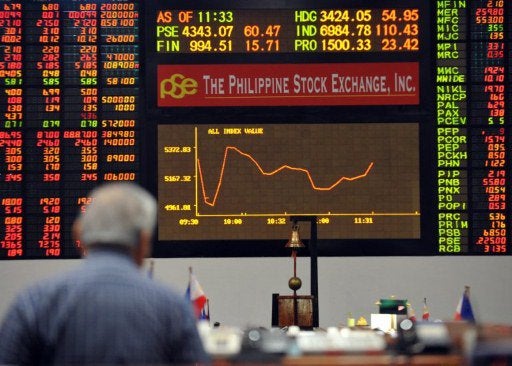 MANILA — The net outflow of the so-called “hot money” in September hit a 32-month high amid profit-taking among foreign investors coupled with less new investments due to a deadly blast in the President’s
hometown and external uncertainty, Bangko Sentral ng Pilipinas data released Thursday showed.

In a statement, the BSP attributed to “profit-taking” last month’s outflow, which was up 56.5 percent from a month ago’s $1.3 billion as well as 23-percent higher than a year ago’s $1.7 billion.

The 27.5-percent month-on-month drop from $1.8 billion and 6.9-percent year-on-year decline from $1.4 billion in foreign portfolio investment inflow, meanwhile, were blamed by the BSP on “lingering uncertainty on the timing of the next interest rate hike in the United States; the bombing in Davao City early September which prompted the government to declare a ‘state of lawless violence’ in the country; and the European Central Bank’s decision to discontinue its bond-buying program.”

BSP data showed that September’s outflow was the highest since June 2015’s $2.2 billion, while the inflow was the lowest since April this year.

The top five investor-countries last September were Luxembourg, Malaysia, Singapore, the United Kingdom and the United States, which accounted for a combined 72.3 percent of the total.

The US, meanwhile, was still the main destination of outflows, with 76.7 percent of total remittances.

But year-to-date, a $1.3-billion net inflow of registered foreign portfolio investment was recorded, as the $13.7-billion inflow as of Oct. 2 outpaced the $12.5-billion outflow.

The year-to-date net inflow also reversed the $414-million net outflow a year ago.

The BSP also noted that the total net inflow during the third quarter, at $687 million, improved from the first quarter’s $410 million as well as the second quarter’s $170 million.

The BSP attributed the jump in third-quarter net hot money inflow to “renewed” interest in peso-denominated government securities as well as an industrial firm’s initial public offering during the July to September period.

Foreign portfolio investments are in the form of placements in publicly listed shares, government and private sector IOUs, and deposit certificates.

Portfolio investments are considered short-term bets—hence the nickname hot money—because these placements may be pulled out quickly.  SFM