Duterte backs plan to triple incomes, wipe out poverty by 2040 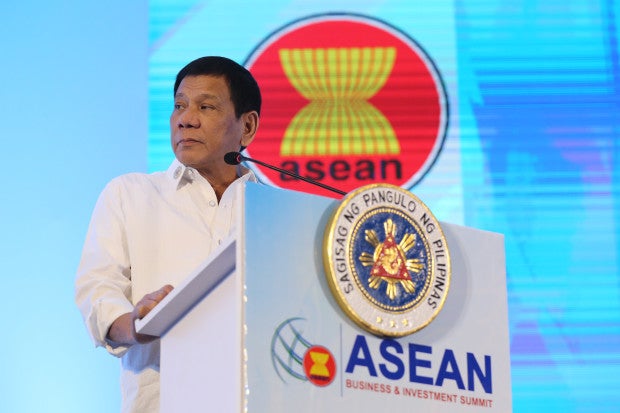 MANILA — President Duterte has ordered the adoption of the National Economic and Development Authority’s (NEDA) long-term vision aimed at tripling Filipinos’ real per capita incomes as well as eliminating hunger and poverty on or before 2040.

Executive Order No. 5 signed by the President on Oct. 11 adopted “Ambisyon Natin 2040” as the 25-year long-term vision for the Philippines, such that “by 2040, the Philippines shall be a prosperous, predominantly middle-class society where no one is poor.”

Under the long-term vision being shepherded by state planning agency NEDA, “our peoples shall live long and healthy lives, be smart and innovative, and shall live in a high-trust society” by 2040.

To do so, EO 5 mandated identifying “appropriate set of milestones” that would guide the medium-term development plans to be developed by four administrations, including the Duterte administration, between now and 2040.

“The four medium-term Philippine Development Plans (PDPs) to be crafted and implemented until 2040 shall be anchored on the Ambisyon Natin 2040 and overall goals. The PDPs shall ensure sustainability and consistency of strategies, policies, programs and projects across political administrations,” EO 5 read.

As such, “all plans of government departments, offices andinstrumentalities, including government-owned or -controlled corporations and local government units, shall be consistent with Ambisyon Natin 2040,” the President ordered.

The Duterte government is currently drafting the PDP for 2017-2022, eyed for publication by yearend.

Launched last March, Ambisyon Natin 2040 is aimed at tripling Filipinos’ per capita income to $11,000 in 24 years’ time by sustaining at least 6.5-percent annual gross domestic product growth alongside the
implementation of policies that would make the Philippines a high-income country by 2040.

A survey conducted early this year showed that majority of Filipinos aspired for a “simple and comfortable life,” which NEDA had said reflected middle-class lifestyle—earning enough, educating all children until college, owning a car, owning a medium-sized house, finding time to relax with family and friends, owning a business, and being able to travel around the country.

“If we do that, it would be a surer way of achieving our vision,” Pernia pointed out.

NEDA Deputy Director-General Rosemarie G. Edillon said roadmaps and strategies under the Ambisyon Natin 2040 had been identified to set “ambitious” targets for the four upcoming PDPs.