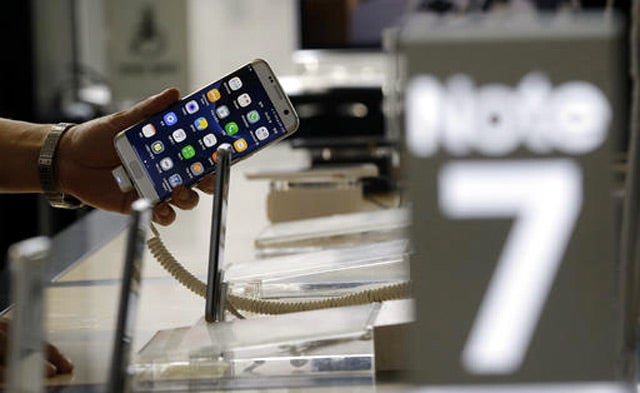 Another Samsung Galaxy Note 7 reportedly began emitting smoke and forced a US flight to be evacuated. AP FILE PHOTO

MANILA — Globe Telecom and PLDT Inc.’s Smart Communications asked subscribers to return their Samsung Galaxy Note 7 smartphones, part of an unprecedented recall ordered by the South Korean technology giant after it failed to resolve problems that caused some of its handsets to explode.

“We have implemented a process to  retrieve Note 7 units from customers and replace them with a device of equivalent value,” Yoly Crisanto, head of corporate communications at Globe, said in a statement. Globe said it was retrieving about 2,500 units of Samsung Galaxy Note 7, which was launched last August.

Ramon Isberto, head of public affairs at PLDT and Smart, issued a similar statement, while asking consumers to power down and no longer use their Galaxy Note 7 handsets.

“If you obtained your phone from us, please go back to the Smart store so we can help you,” Isberto said.

The telcos said the recall has been in line with recent announcements from Samsung, which has been having difficulty addressing issues with its flagship smartphone line.

“We wish to inform our customers that effective immediately, Globe will discontinue selling the Samsung Note 7 and will no longer issue same device replacements to customers,” Globe said.

“We are taking this matter seriously and will do everything we can to keep our customers from harm when using our service,” the telco added.

Samsung said it already halted the production of its Galaxy Note 7. In a statement, it advised all carrier and retail partners around the globe “to stop sales and exchanges of the Galaxy Note7.”

“Since the affected devices can overheat and pose a safety risk, we are asking consumers with an original Galaxy Note7 or a replacement Galaxy Note7 to power it down and contact the carrier or retail outlet where you purchased your Galaxy Note7,” Samsung said.

Samsung issued several apologies and an initial recall last month in the wake of complaints of exploding batteries. Replacement devices were issued, but some of those caught fire as well.

Samsung said it has been working with the US Consumer Product Safety Commission to investigate the recently reported cases involving the Galaxy Note 7.  SFM