Trump lashes out at ‘disloyal’ Republicans 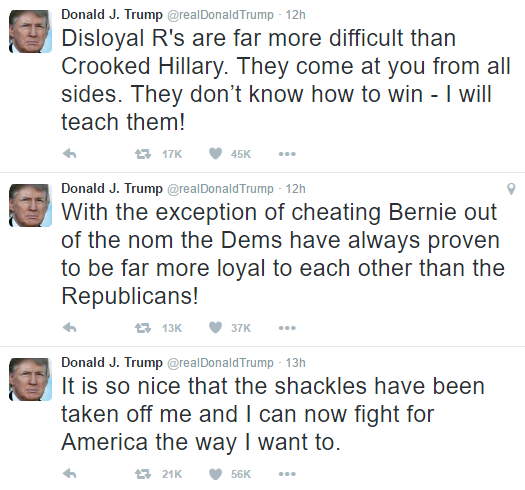 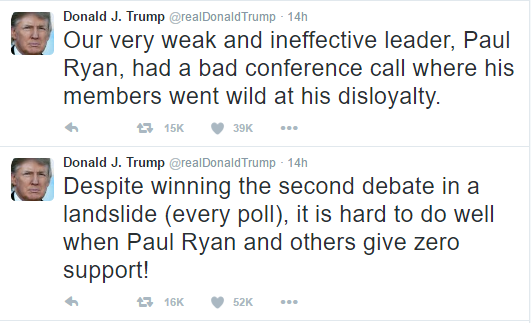 WASHINGTON—Embattled presidential hopeful Donald Trump lashed out against “disloyal” Republicans in a ranting tweetstorm Tuesday, deepening a split that threatens the future of the 162-year-old party.
READ: Trump still alive, but Republican Party in tatters

“It is so nice that the shackles have been taken off me and I can now fight for America the way I want to,” Trump said in a three-hour cyber outburst. “I will teach them!”

He doubled down in an interview with Fox News Tuesday night, saying of Ryan: “I don’t want his support. I don’t care about his support.”

“I wouldn’t want to be in a foxhole with these people, including Ryan, especially Ryan,” he added later in the interview, referring to Republicans who have turned their backs on him.

Relations between Trump and party leaders have always been strained — from the outset many considered the bombastic reality-TV-star-turned-politico unfit to take up the mantle of Abraham Lincoln and Ronald Reagan.

But the snapping point has been Trump’s precipitous fall in the polls after the emergence of a video in which he bragged about groping women.

US President Barack Obama addressed the scandal Tuesday, after White House spokesman Josh Earnest earlier in the day called the comments “repugnant” and said most people would consider the actions described as “sexual assault.”

“You don’t have to be a husband or a father to say that’s not right. You just have to be a decent human being,” Obama said while campaigning for Clinton in North Carolina.

Trump has apologized for the comments, saying they were just “locker-room” banter.

“If that’s why I’m going to lose an election… that’s going to be sad,” he said in the Fox interview.

He added with his typical bombast: “But I think we’re going to win.”

The latest Real Clear Politics polling average has Clinton ahead by six points across the country, and the latest polls show her ahead in a slew of must-win states for Trump.

With his campaign in a tailspin, Trump seemed determined to ram a wedge between party leaders and the radicalized grassroots that propelled his political career.

The gloves are off

Trump’s anger seems to have been prompted by Ryan suggesting in a conference call with Republican lawmakers on Monday that they stop defending the party nominee and focus on limiting electoral losses in Congress.

But Trump’s belligerent reaction is an ominous sign for Republicans worried about losing control of the House of Representatives and the Senate.

“Disloyal R’s are far more difficult than Crooked Hillary. They come at you from all sides. They don’t know how to win — I will teach them!” Trump tweeted.

Trump’s campaign has long had a no holds barred quality but the break with the Republican establishment signals the start of an even more vitriolic campaign.

Obama said it “does not make sense” that some Republicans expressed their disapproval of Trump’s lurid comments but continue to support him for the White House.

“You can’t repeatedly denounce what is said by someone and then say: I am still going to endorse him to be the most powerful president on the planet,” he said.

Trump has also alienated allies by bringing up unproven sexual abuse allegations against Clinton’s husband, former president Bill Clinton, in a debate Sunday watched by tens of millions of Americans.

A right-wing website has offered $5,000 to anyone who goes to a rally and does the same.

An unsparing Trump campaign ad released Monday showed Hillary Clinton when she had pneumonia last month, coughing at a dais and stumbling as she tried to get into her motorcade after a 9/11 anniversary ceremony.

“Hillary Clinton doesn’t have the fortitude, strength or stamina to lead in our world,” the narrator says.

Clinton’s campaign will be eager to tether the whole Republican Party to Trump’s harsh message — which is popular with the party base but appears to have little appeal with the wider public.

“Somewhat of a civil war is breaking out in the Republican Party,” said Clinton communications director Jen Palmieri. “But I think that Donald Trump didn’t become the nominee of his party on his own.”

“The voters I imagine will hold them accountable (in) House and Senate races,” she added.

Gore has been largely absent from politics since he lost the 2000 race in Florida to George W. Bush by a handful of votes.

In Miami, he focused on the high stakes of November’s election. “Your vote really, really, really counts. You can consider me as Exhibit A.”

Read Next
US eyes retaliation for missile attack on US warships off Yemen
EDITORS' PICK
SANTIS Delicatessen: The road to survival is sweet and savory
Gilas out to prove Korea win not a fluke; Tab fires back at ‘lucky shot’ remark
Piolo Pascual: The Ultimate Heartthrob continues to level up
Duterte to issue memo on face shields this week
LOOK: ‘Low vaccination’ turnout in 4 Manila sites after no walk-in policy
Eleazar: PNP open to ICC probe but PH judicial process is working
MOST READ
Duterte to issue memo on face shields this week
Palace: Face shields no longer needed to be worn outdoors
DFA opening 10 satellite offices to boost passport services
Lacson or Pacquiao a possible presidential candidate for NPC – Sotto
Don't miss out on the latest news and information.