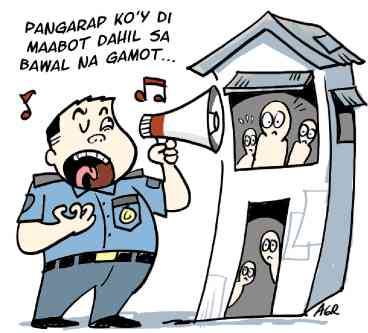 Senator Leila de Lima wants police to use a megaphone to warn crime suspects before they could make an arrest. De Lima made the proposal in Senate Bill 1197 or the ‘Anti-Extrajudicial Killing of 2016.’ ART BY ALBERT RODRIGUEZ

Senator Leila de Lima is proposing that a megaphone be used by the police to warn crime suspects before they are arrested in operations.

De Lima is making the proposal in Senate Bill 1197, or the “Anti-Extrajudicial Killing of 2016,” that seeks to define extrajudicial killing (EJK).

The senator initiated a Senate probe into alleged rise of EJKs under the Duterte administration.

In conducting arrest, the police should issue a warning by announcing the same through a megaphone, the bill stipulates.

SB 1197 defines extrajudicial killing as “the unlawful, and deliberate killing of targeted individuals or groups thereof, carried out by agents of the State and under its order or acquiescence in lieu of arrest, investigation and prosecution.”

“Extrajudicial killing includes summary killing perpetrated by private individuals for purposes of carrying out on their own or in the context of vigilantism, a campaign or policy of the State,” it said.

Also under the bill, the Commission on Human Rights (CHR) will have the authority to investigate cases of EJKs, motu propio or on complaint.

The National Bureau of Investigation, meanwhile, will be mandated to make relevant services available to the CHR and/or the PNP (Philippine National Police) in their inquiries or investigation of EJK cases.

“Firing of warning shots is absolutely prohibited,” the bill said.

For the PNP, the bill enumerated the following minimum standards that should be observed by the police when conducting arrests, raids, searches and seizures.

In conducting arrest, the police should issue a warning by announcing the same through a megaphone, the bill stipulates.

“Firing of warning shots is absolutely prohibited,” the bill said.

“Necessity of force test” should be the principal rule in police intervention operations or PIOs.

“Use of force when employed shall be proportionate, and shall be allowed only when there is clear and convincing attempt to evade arrest,” the bill said.

“Alternative non-lethal incapacitating weapons,” it said, would be the primary tool to effect arrest when there is resistance.

The penalty of life imprisonment without the benefit of parole would be imposed against public officers, persons in authority, agents of a person in authority, or private individuals found guilty of extrajudicial killing as defined in the bill.

Public officials, who would fail to prevent, investigate, or file necessary actions in court against those suspected of having committed an extrajudicial killing would also be administratively held liable. CBB