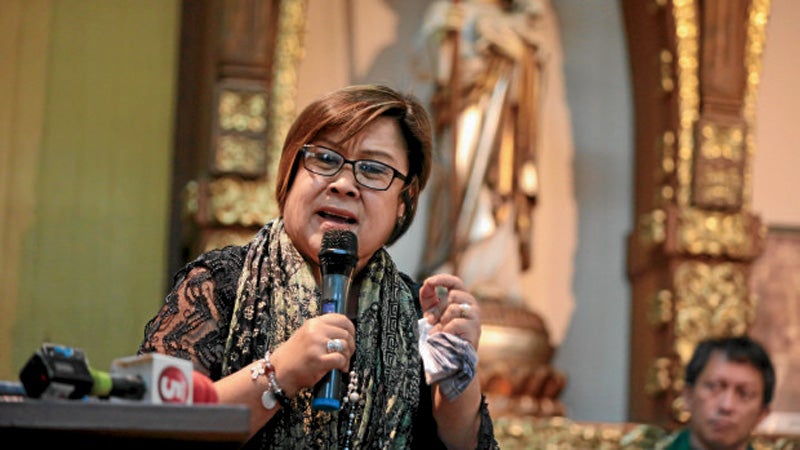 Senator Leila de Lima speaks at a mass for Option for Life at the CBCP Chapel in Manila on Monday, October 10, 2016 in celebration of the World Day Against Death Penalty. GRIG C. MONTEGRANDE/Philippine Daily Inquirer

Only the guilty flee, Sen. Leila de Lima said on Monday as she assured the public she had no plans of leaving the country in the wake of a lookout bulletin issued against her by the Department of Justice.

“They (DOJ) should not waste their effort, I have no intention of leaving to escape this crisis… I am innocent and therefore I will not escape,” she said in an interview with reporters after hearing Mass in Intramuros, Manila.

An ILBO is not the same as a hold-departure order, which can be issued only by the courts. It however has a similar effect on the court-issued travel ban, as a subject seeking to go abroad must first get permission from the DOJ so it could be monitor his or her whereabouts.

Justice Secretary Vitaliano Aguirre II issued the ILBO against De Lima et al. on Oct. 7, but it was released only on Monday as the House of Representatives justice committee resumed its inquiry into the narcotics trade in the state penitentiary when De Lima was justice secretary.

Baraan had been in the United States even before the justice committee started its investigation. Sanchez, on the other hand, testified before the committee last week on De Lima’s alleged romantic relationship with Dayan.

In an “extremely urgent” memorandum, Aguirre directed Immigration Commissioner Jaime Morente to immediately inform him or other DOJ officials of any attempt by De Lima and the others to flee

He said the order was issued upon the request of National Bureau of Investigation Director Dante Gierran, as the six were suspected of involvement in the “proliferation and trade of illegal drugs” in the NBP “and other areas.”

“Considering the gravity of the possible commission of any offense, there is a strong possibility they may attempt to place themselves beyond the reach of the legal processes of (the DOJ) by leaving the country,” Aguirre said in a two-page order.

“We thus deem the issuance of an ILBO against the subject persons prudent in order to at least monitor the itineraries of their flight, travel and/or whereabouts,” he said.

De Lima, President Duterte’s fiercest critic, said she rarely traveled overseas and she should have a good reason for leaving the country, like an invitation to a speaking engagement.

“Even if they are doing this to me, I will face all of it because I don’t want to show any weakness,” she said.

De Lima, who initiated the Senate inquiry into the rising summary killings in the Duterte administration, on Monday attended a Mass at the Catholic Bishops Conference of the Philippines on occasion of World Day Against the Death Penalty.

The senator heard Mass at the same time that convict Jaybee Sebastian was testifying against her.

The senator said that only the courts could stop people from leaving the country.

In a text message to reporters, De Lima said there was no basis for the lookout bulletin against her as the DOJ had not even filed a case against her in the Ombudsman despite the hearings.

“I don’t think a lookout bulletin can be justified using a kangaroo court’s persecution of a sitting senator. I will take the necessary legal action against this latest assault on my person by my successor at the DOJ,” she said.

De Lima slammed her accusers for persecuting her, calling them “men without balls.“

She said she had dared them to arrest her “but no one came,” adding that the lookout bulletin was “just icing on their cake” as “they have already done worse.”