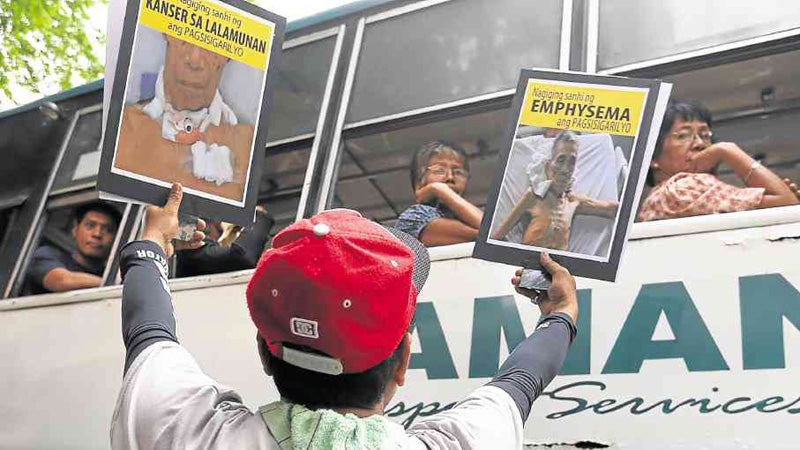 The days of puffing cigarettes in public places, whether indoor or outdoor, are numbered.

President Duterte is set to sign an executive order (EO) that will implement a no-smoking policy nationwide, according to Health Secretary Paulyn Jean Ubial.

“The no-smoking policy being implemented in Davao will also be enforced across the country,” Ubial said in a recent interview.

She said she expected the President to issue the EO sometime within the month.

Two weeks ago, Mr. Duterte, a former mayor of Davao City, reiterated his plan to ban smoking in the country, saying it had only brought diseases to both the smokers and victims of secondhand smoke.

Davao City’s smoking ban has long been recognized by the World Health Organization (WHO) as an effective smoke-free measure in an urban setting.

Once the EO is signed, all public places will be 100-percent smoke-free. “Nobody can smoke anymore, whether indoor or outdoor,” Ubial said.

Apart from the EO, Ubial said the health department was also set to push for the amendment of the Tobacco Regulation Act of 2003, or Republic Act No. 9211.

Only by revising RA 9211 can the government be able to eliminate other contentious tobaccocontrol policies, the health secretary said. Among them, she pointed out, were the point-of-sale (POS) advertisements and the designation of smoking areas.

“We’re hoping to change that so that there will be no more gray area and totally we can ban point-of-sale advertisements as well as the designation of smoking areas,” Ubial said.

The antitobacco advocate, New Vois Association of the Philippines (NVAP), is calling for the revival of the ban on (POS) advertisements of cigarette products.

“POS advertisements are being allowed in [most areas] of the country, but not in Davao City and in some other areas. We hope the national government can take a cue from President Duterte’s hometown in pushing for the restriction of outdoor advertising for cigarette products,” NVAP president Emer Rojas said.

Removing POS ads would be crucial to combating the threat of smoking-related illnesses, Rojas said.

He said this was stressed by the WHO in its Framework Convention on Tobacco Control, to which the Philippines is a signatory.

“A comprehensive ban on all tobacco advertising and promotion, POS included, is deemed one of the more important measures that need to be imposed if the government expects to see a reduced consumption of tobacco products,” Rojas said.

Asked about the tobacco industry again opposing these tobacco-control measures, Ubial said: “It’s up to them to oppose the measures. They will go against the President.”