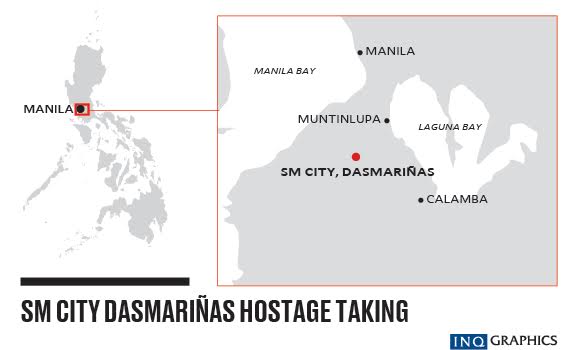 LOS BANOS, Laguna – A woman was killed while three other people were injured in a hostage-taking incident inside an SM mall in Dasmariñas City, Cavite on Sunday.

Cavite police chief Sr. Supt. Arthur Bisnar, in a phone interview, said Lacdao, from Dulag Leyte, entered the mall around 12:45 pm and was said to be looking for his wife, Erna Lacdao.

In an earlier interview, Bisnar said the hostage-taker was a mall janitor and the female hostage was also a mall employee. It was not immediately clear why the suspect was looking for his wife but police said they were looking into “jealousy” as a motive.

Armed with a knife, Lacdao began stabbing people, one of them identified as Jollabelle Sumalin, and two other men.

Former Cavite Governor Jonvic Remulla in an interview with Radyo Inquirer 990AM said Sumalin, who died shortly after the attack, was stabbed under the armpit, piercing through the heart. Remulla said another hostage victim was also stabbed in the back and fortunately survived.

Lacdao then held hostage another woman, identified as Mylene Balajadia.

“We tried to negotiate (for the release of the hostage) but he would not surrender,” Bisnar said.

He said policemen had no choice but to shoot the suspect “in the body” and brought him to a hospital.

The other victims were also rushed to a hospital, Bisnar said.

In a statement, SM said the incident started as a “domestic problem that was brought to the mall.”

“The local PNP and our security worked together to manage the situation. All tenant personnel and customers are all safe and away from the area,” the statement read. With reports from YG/JE/rga