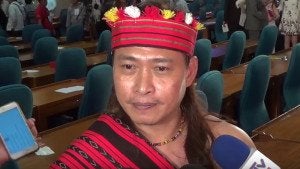 Ifugao Rep. Teddy Baguilat was driving through Ortigas Center in Pasig City at past 2 in the morning a few days ago when his car broke down.

He was alone. As he waited for his driver to fetch him, his mind was seized by a sudden paranoia. So he approached a security guard at a nearby building and chatted with him. “In my head I was thinking, ‘at least there’s going to be a witness,’” he said.

The nonincident is just a sample of how the past couple of months have been hard on the 50-year-old Baguilat, an outspoken critic of the government.

“It’s difficult. It’s stressful,” he said with a rueful smile.

“Every time I wake up, I think about how it would have been so much easier to join the majority.”

Baguilat, after all, is the nominal leader of the self-styled “Legitimate 8,” a scrappy band of lawmakers bent on wearing the mantle of the opposition in a House of Representatives controlled by President Duterte and his allies.

As of this writing, the “Legitimate 8” has lost a member, Sagip party-list Rep. Rodante Marcoleta, who is moving to the supermajority. They are now calling themselves the “Magnificent 7,” according to Rep. Edcel Lagman.

Force to reckon with

They are not, in fact, recognized as the official minority bloc in the 293-strong chamber. These days, they operate in the fringes of the legislature, having no committee memberships to speak of and enjoying few of the perks of congressional work. Even so, this independent bloc of eight has emerged as a force to reckon with in the House.

They hold weekly press conferences where they express scathing comments against Mr. Duterte on his human rights record and his foreign policy pronouncements.

They have become media darlings—Baguilat is a journalism graduate—often getting more TV airtime or newspaper space than the official minority members.

Some colleagues have described them as the “conscience of Congress.”

But as Baguilat has found, being in the opposition in a government ruled by the iron-fisted Mr. Duterte can be a daunting place. Case in point: Sen. Leila de Lima.

The freshman senator, the President’s No. 1 critic, is now beleaguered from all sides, battling charges of corruption during her tenure as justice secretary and even threats of having an alleged sex tape of hers shown at a congressional hearing.

“Definitely, there has been a chilling effect,” Baguilat said of De Lima’s woes. “After she was being crucified, colleagues would approach us and say, ‘Grabe pala (too much)! If you’re a critic of the administration, they could do anything to you,’” he said.

Some of his friends in the supermajority would ask in hushed tones: “Aren’t you scared?”

As it turns out, Baguilat is—scared—and he has no qualms admitting it. “Sometimes you can’t help but be affected,” he told the Inquirer, recalling how his aunts back home would pray the novena out of worry for his safety.

But Baguilat and his seven allies, including the “bedrock” of the group, veteran Rep. Edcel Lagman of Albay, knew what they were getting into from the beginning.

Except for the party-list lawmakers, Baguilat, Lagman, and the three others belong to the erstwhile ruling Liberal Party (LP), whose numbers have been decimated by Mr. Duterte’s PDP-Laban, now the dominant force in the chamber.

Another 28 LP members led by former Speaker Feliciano Belmonte Jr. have joined the administration bandwagon, a multiparty coalition that has been touted as Mr. Duterte’s “supermajority.”

The official minority bloc is the group led by Minority Leader Danilo Suarez of Quezon, whom members of the “Legitimate 8” have at times referred to as the “cooperative minority” or the “majority’s minority.”

In a tit for tat, Suarez has labeled them the “Bitter 8.”

The rancor between the two factions began when the 17th Congress opened in July. The LP had seesawed between joining the supermajority and forming the minority bloc. “On that Tuesday before the State of the Nation Address, the decision of the LP was to lead the minority. But on Saturday we learned Sonny (Belmonte) changed his mind. We were at a loss,” Baguilat recalled.

By then, he and a few others of a similar mind had already decided to go against the wishes of the majority. “The initial decision was to boycott, but upon deep reflection, we decided to fight, even if it was an impossible, quixotic dream,” Baguilat said.

Later, Lagman called a meeting of the eight to his residence. All the while, he said he thought it was Lagman, a former Minority Leader himself, who would be the leader of the group. “But that’s the problem with being late to the party. When I arrived, they told me they had decided to make me run for Minority Leader,” he said.

Asked why, Baguilat said it was primarily because he was an unknown entity. “They knew Cong. Edcel’s numbers. Who is Teddy Baguilat? I was flying under the radar. The others like Toby [Tiangco], Egay [Erice] were high-profile. They didn’t know my strength.”

“That’s why so many abstained [to hold out], because they would rather be in the majority. Then we knocked them out,” he said with a laugh.

To the surprise of many, Baguilat placed second to Davao del Norte Rep. Pantaleon Alvarez when votes were cast for House Speaker on June 25, while Suarez placed third. A sizable number, meanwhile, abstained—which would come in handy later.

Per tradition, the Ifugao native should automatically have become the head of the minority. But the House leaders had other plans. Those who voted for Suarez and those who abstained met separately to install him as the new Minority Leader. The Baguilat group did not bother to join.

Thus, the “Legitimate 8” was born.

In what seemed to be a warning to his peers, the dusky and long-haired Baguilat made heads turn when he wore a fiery red g-string and Ifugao garb at Batasang Pambansa during the President’s State of the Nation Address in July.

Born to Teodoro Baguilat Sr., a retired agriculture official, and Felisa Brawner, a lawyer, Baguilat was born in Manila on July 30, 1966. But at 13, he returned to his father’s Kiangan, Ifugao hometown to rediscover his roots.

A journalism graduate at the University of the Philippines in Diliman, Quezon City, he entered politics by running for municipal councilor of Kiangan at 25. He went on to become the mayor of Kiangan and, later, governor of Ifugao province.

Though the “Legitimate 8” initially planned to contest Suarez’ assumption of the minority post, Baguilat revealed that they had since scrapped the idea.

“Upon consultation with legal experts, we realized it would be difficult. The Supreme Court may just decide it is an internal issue to a separate and coequal branch of government. It might be a futile exercise,” he said.

His current stature in the House is a far cry from what it was only a few months ago. In the previous Congress, Baguilat was chair of two House committees: on indigenous peoples and agrarian reform.

But the “Legitimate 8” will continue the struggle, he said.

He said there was nothing wrong with the minority being cooperative to the wishes of Mr. Duterte’s administration. “That’s okay, but does it mean being an author of administration bills?” he said.

He noted that Suarez himself had co-authored a number of measures pushed by Mr. Duterte and Speaker Alvarez, including the restoration of the death penalty, the grant of emergency powers to address the traffic crisis, and the move to amend the law allowing the Sandiganbayan to preventively suspend lawmakers facing graft.

“Even if you agree with the majority, isn’t it delicadeza to at least not author the bill yourself? How can you fiscalize?” Baguilat said.

An active social media user, the Ifugao representative said he had been receiving plenty of hate messages from Mr. Duterte’s supporters. He said he was amazed that the President had amassed such a rabid following.

But “people have to be more discerning,” he said. “Don’t act like every utterance of his is the word of God, and anything you say against the President is the word of the devil.”

He admitted that being the new face of the opposition in the House of Representatives was hard on his nerves.

“I don’t want to be paranoid, but before Martial Law , everybody was branded as an enemy of the state … Ninoy [Aquino], the reds, the [Moro rebels]. All of this happening seems like a prelude to something more,” Baguilat said.