newsinfo / Headlines
Headlines
'I WILL NOT STICK WITH YOU’ 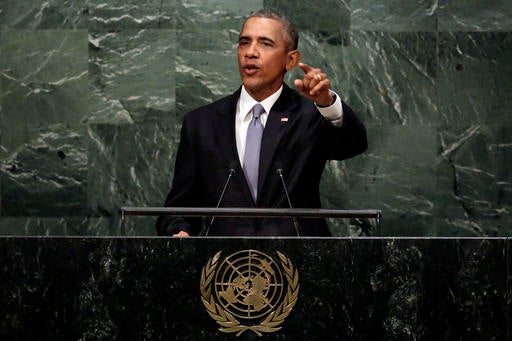 President Duterte has told US President Barack Obama to take stock of his country’s diplomatic ties to the Philippines or risk losing its longtime ally.

Mr. Duterte also dared Obama to oust him or assassinate him through the Central Intelligence Agency.

The President mentioned Obama’s name four times in his speech as he repeated twice that this year’s annual war games would be the last because it was not part of the Enhanced Defense Cooperation Agreement (Edca).

“Assess yourselves because if you don’t, you will lose the Philippines,” Mr. Duterte said, addressing Obama, in a speech in Davao City Friday night.

‘I’m not your servant’

“The Americans, the EU (European Union), the human rights [groups], the way they talk, they reprimand [me] as if I [were] their ‘boy.’ I am not your servant. Do not do it to me. When you are talking to me, Mr. Obama, human rights [groups] and the EU, if you are not fools, I am the President of the Republic of the Philippines,” said

The President resented Obama telling him to conduct the drug war “the right way” while the European Union and the United Nations have made sweeping accusations that he was tolerating extrajudicial killings in the country.

The President said he did not care if the United States moved behind the scenes to eject him from power.

“You want to oust me. You want to use the CIA, go ahead. What happens is really part of my destiny. If I’m ousted, that is part of my presidency. But for as long as I am there, don’t treat us like a doormat because you’ll be sorry for it. I don’t want to antagonize you but try to give us a little respect. You don’t go around reprimanding a head of state as if you were talking to a … [son of a bitch],” said the President.

“I will not stick with you,” said the President, noting that he has China and Russia waiting in the wings.

The President also repeated his plan to end the war games with the United States, which he earlier claimed benefited only the Americans and not the Filipino soldiers.

“The war games is not part of Edca, mind you, if you look at it again. Ask your lawyers because I’ve read it and the war games, it’s not there in flat words that you can have it. This year would be the last,” said Mr. Duterte.

He said if he wanted to do it the right way, Obama should first ask his ambassador to the United Nations to make a complaint against the Philippines and that “collegial body” would refer it to one of its organs, the Human Rights Commission.

“After they investigate and make the reporting, that is the time you call my attention.

Read Next
The price to pay for the chance to change
EDITORS' PICK
Smart celebrates all kinds of ‘#SimplyLove’ for Pride Month
‘Work from beach’ suits Pinoy digital nomads
SANTIS Delicatessen: The road to survival is sweet and savory
SWS: Over 12M Filipinos still jobless as of May 2021
Smart brings KCON:TACT especially 4U to subscribers from June 19 to 27
Another Filipino falls victim to hate attack in California
MOST READ
Gordon eyes VP running mate for 2022 polls
William Martinez sometimes feels his kids ‘don’t remember’ him anymore
Gilas Pilipinas routs Indonesia anew, stays unbeaten in Fiba Asia Cup qualifiers
Spread of Delta variant ‘prevented’ –expert
Don't miss out on the latest news and information.