No more weekday sales in bid to ease Metro traffic 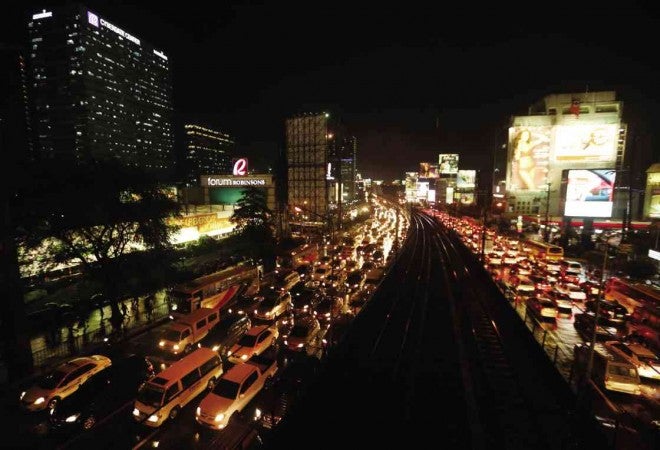 In this September 2015 photo, traffic on Edsa near Pioneer Street in Mandaluyong City is at a standstill after a sudden heavy downpour. INQUIRER PHOTO

In a bid to ease traffic during the holidays, the Interagency Council on Traffic (I-ACT) and mall operators in Metro Manila agreed on Friday that starting Oct. 21 until Jan. 9, 2017, mall sales will no longer be conducted during weekdays. Instead, sales will be held strictly on weekends.

Chief Supt. Antonio Gardiola, head of the Philippine National Police’s Highway Patrol Group (PNP-HPG), said that apart from the weekend-only regulation, mall operators will also be required to notify and submit to the I-ACT their traffic plan two weeks ahead of their scheduled sale.

Gardiola said that motorists will no longer be allowed to stay on the road while they are queuing for a particular mall’s parking space.

The MMDA said that historically whenever there’s a sale along Edsa, where 16 malls are located, average traffic speed in the major highway drops to as slow as 5 kph.

Next Thursday, another meeting between I-ACT and mall operators will be conducted on the possibility of implementing a 12 midnight to 5 a.m. delivery period of products. Gardiola said that they will also finalize the late-opening and late-closing scheme (11 a.m. to 11 p.m.) for malls.