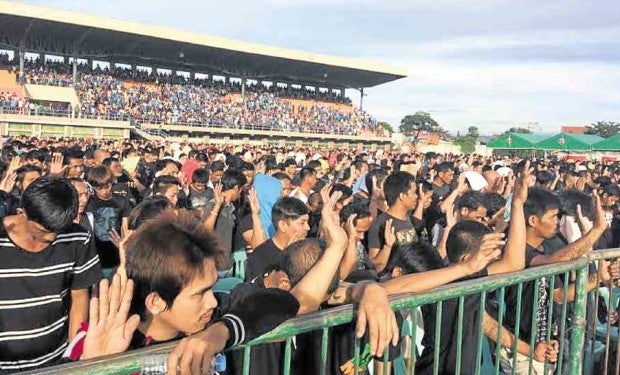 The survey, conducted from Sept. 24 to 27, revealed that 84 percent of the respondents were satisfied with Duterte’s war against illegal drugs while 8 percent are dissatisfied and another 8 percent remained undecided.

The question asked was “Please tell me how satisfied or dissatisfied you are with the performance of government in its campaign against illegal drugs?”

The survey was conducted through face-to-face interviews with 1,200 adults nationwide and with sampling error margins of ±3 points.

Respondents were also asked the question, ”In the police’s fulfillment of their duty in the campaign against illegal drugs, in your opinion, how important is it that they arrest suspects allegedly involved in the illegal drug trade alive?”

The survey showed that Duterte earned an “excellent” net satisfaction rating in across all areas and socioeconomic classes.

In Mindanao, the President got +87 while he got +76 in Visayas. In Luzon, he got a net satisfaction rating +71 net rating.

Across socioeconomic classes, Duterte’s crackdown on illegal drugs got +79 from class E, +79 among class ABC and +76 in class D.

As of Oct. 2, 1,360 alleged drug personalities have been killed in police operations./rga