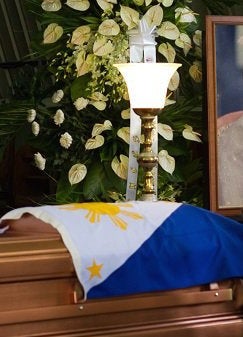 As the vice mayor of the town, under the rules of succession in the Local Government Code, Tabujara’s son, John Rey, has taken his oath as the mayor of Cauayan.John Rey’s second cousin, Cauayan’s first councilor Rico James Tabujara will assume the post of vice mayor.

The Philippine flag at government buildings in Cauayan were flying half-mast on Thursday for the death of the town mayor.

She described the mayor’s passing as heartbreaking “but you did not go alone, a part of us whose lives have been touched by your kindness, goes with you.”

“I will always remember Mayor Jerry to be passionate about his work as a public official of Cauayan and a loyal partymate who never left me in spite of pressure to do so,” he added.

John Rey said his father’s condition deteriorated after he underwent surgery late last year for the removal of his gall bladder and bile, and for a bypass.

His father ran for re-election as mayor and won in the May polls despite being unable to campaign, the vice mayor said.

He said his father returned to Cauayan on May 8 for the elections the next day, but was again hospitalized in Manila soon after.

The remains of the mayor are tentatively expected to arrive in Negros on Friday, and will immediately be brought to Cauayan. No date has been set yet for his funeral, newly installed Mayor John Rey Tabujara said.

The late mayor is also survived by his wife, Ananita Tabujara, and other children Analiza and Christine.
SFM