4-year-old Althea dies in drug war, together with her dream to be a cop 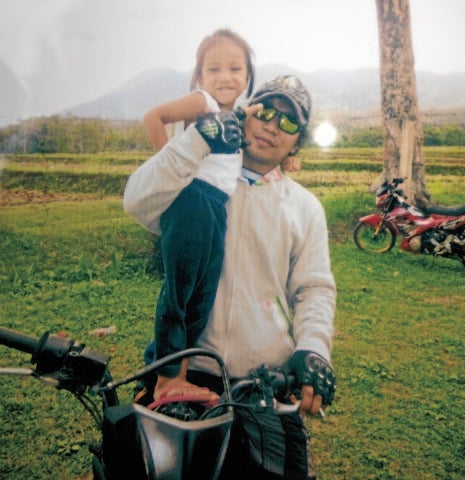 DUMAGUETE CITY—Four-year-old Althea Fhem Barbon wanted to be a police officer to make her neighborhood in Guihulngan City, Negros Oriental province, a better place to live.

But she did not live long enough to fulfill her dream.

Althea, a Kindergaten 1 pupil at Gucce Learning Center in Guihulngan, was felled by a single bullet fired by one of the policemen who were chasing her father, a suspected drug dealer.

She was the youngest to die in the Duterte administration’s war on illegal drugs, which has claimed the lives of more than 3,000 people.

Her family has filed a complaint against the police at the Commission on Human Rights (CHR) to seek justice for the little girl whose only fault was to go with her father, Pim Alrick Barbon, 31, to buy popcorn in the plaza on Aug. 30.

Instead of bringing her back home, Barbon took his daughter to a rendezvous with two men who wanted to buy P500 worth of drugs on Larena Street in Barangay Poblacion that evening.

The two men turned out to be policemen out to entrap Barbon, said to be No. 5 on the list of drug suspects in Guihulngan.

When he sensed the trap, Alrick, who was on his motorcycle, fled. The policemen chased after him on board another motorcycle.

One of the policemen fired at Barbon, hitting him in the back. The bullet overpenetrated and struck Althea, who was sitting in front of her father, and lodged on her spine.

Barbon was killed outright, while Althea died in a hospital in Dumaguete two days later.

The Barbon family didn’t deny that Alrick was into drug trading.

His younger brothers—Narc David, Dan Lowen and Aris—have been detained at the Bureau of Jail Management and Penology (BJMP) jail in Guihulngan since 2015 on drug and weapons charges.

His mother, Marilyn, 58, said her son left home and stayed away for four months. He returned in July only to be killed a month later, she said.

“We want justice for our little girl because she had nothing to do with her father’s illegal activities,” Marilyn said.

“It is painful for us because Althea was innocent,” she added.

Althea’s mother, Rowena Lorica, 27, who worked as a salesclerk in Cebu City, went to the CHR in Dumaguete two days after her daughter and husband were buried to file a complaint against the police for the girl’s death.

“Why did they kill my baby? She didn’t deserve to die. I want justice for my baby,” Lorica said.

She said she could not accept what happened to her daughter, whom she last saw in April during the child’s fourth birthday.

Jess Cañete, CHR chief in Negros Oriental, said that based on  initial investigation, there was no basis to the claim of the police that Barbon used his daughter as a human shield.

He pointed out that the policemen were chasing after Barbon, which meant that they were behind him.

“How could [Barbon] use his daughter as a human shield if the policemen were behind him?” Cañete asked.

If the investigation would show negligence on the part of the policemen, the CHR would file charges of reckless imprudence resulting in homicide against the officers, he said.

He said the policemen would be asked to submit a counteraffidavit, while forensic experts from CHR-Manila would come to Guihulngan in mid-October to autopsy the girl’s body.

Supt. D’Artagnan Denila Katalbas Jr., chief of the Guihulngan police, said the two policemen involved in the buy-bust operation had been relieved and transferred to the Negros Oriental Provincial Police Office pending investigation by the Internal Affairs Service.

Katalbas said the police regretted what happened to Althea but he stressed that the policemen did not notice the girl because the place was dark.

Had they known Barbon was carrying a child, he added, they  would not have pushed through with the operation.

On Oct. 11, the Barbons will commemorate the 40th day of Althea’s death. They plan to visit Althea’s grave and offer Mass for her.

But they said they would never rest until justice was served. “We hope she will be given justice,” Marilyn said.