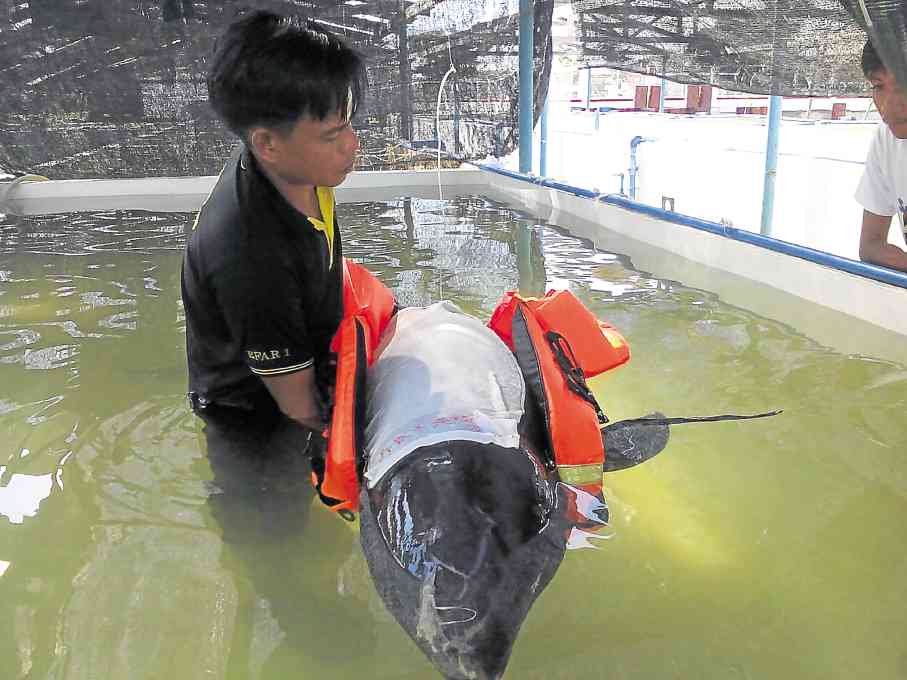 The melon-headed dolphin, shown here being treated at a Bureau of Aquatic and Fisheries Resources office facility in Alaminos City, Pangasinan province, died on Thursday.—CONTRIBUTED PHOTO

VIGAN CITY—A female melon-headed whale (Peponocephala electra) caught two weeks ago in Dasol, Pangasinan province, died on Thursday while undergoing treatment at a facility of the Bureau of Fisheries and Aquatic Resources (BFAR).

Fishermen found the 2-meter long whale beached along Dasol Bay on Sept. 23 and brought it back to the sea. But it was sighted again in the afternoon on the same day so village officials decided to bring it to the BFAR facility in Alaminos City.

Samantha Licudine, a BFAR veterinarian, said the whale had many scratches in the body and had a deep cut near its snout.

“Maybe it was trying to escape from something so there was a laceration,” she said.

The whale was given intensive medication and was under observation when it died.

“The whale already had a good appetite and was interacting with BFAR employees, so we had high hopes it would survive,” Licudine said.

Hours after the whale died, a rough-toothed dolphin was found beached at the coastlines of Sto. Domingo town in Ilocos Sur province. Fishermen carried it toward the delta that leads into the sea.

The dolphin was very weak but did not bear any visible  injuries, said Randy Reburon, fishery coordinator of Sto. Domingo.