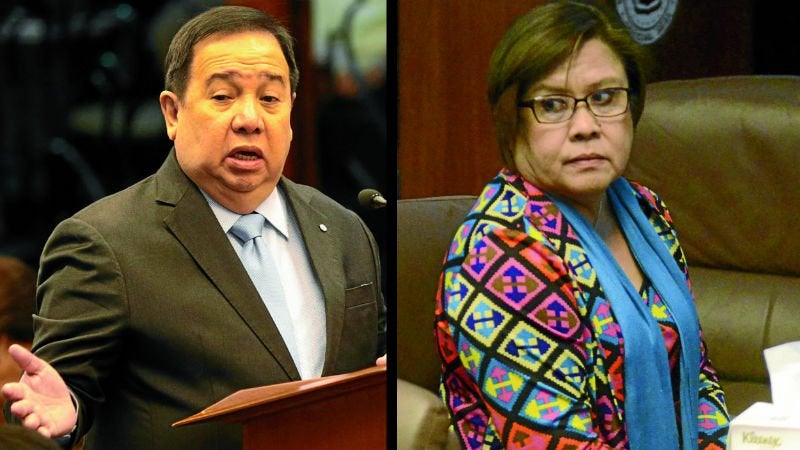 Senators Richard Gordon and Leila de Lima during a hearing on extrajudicial killings in the government’s war on drugs. (INQUIRER FILE PHOTOS)

MANILA — Some bickering senators have decided to cast aside their differences as Senate President Aquilino Pimentel III moved to keep the peace in the chamber.

The concerned senators seemed conciliatory two days after Monday’s inquiry into the alleged extrajudicial killings now in the country where heated discussions, accusations and counter-accusations as well as a walkout triggered bad blood among them.

On Wednesday, Senator Antonio Trillanes IV went to see Sen. Richard Gordon to talk and promised he would end his word war with him, according to Gordon.

“I said no problem. We are going to be here for a long time. Let’s get along with each other so we can be happy here,” Gordon said of Trillanes.

Gordon too has calmed down, telling reporters he would no longer deliver a privilege speech he had planned to do so Wednesday on the unparliamentary acts and remarks he decried were cast particularly by Sen. Leila De Lima during Monday’s hearing by the Senate justice and public order committees.

He said he did not push through with his speech because senators were getting together for the centennial celebration of the Senate.

Gordon earlier accused De Lima of concealing from the Senate committee on justice and human rights that confessed hitman Edgar Matobato was charged with the kidnap-for-ransom and murder of Salik Makdum before the National Bureau of Investigation in 2002. Matobato earlier testified that he and members of the Davao Death Squad under then Mayor Duterte killed Makdum for being a terrorist. Gordon claimed that De Lima “concealed” from the committee the fact that the co-accused of Matobato were not even Davao City cops.

On the other hand, the transcript of the Sept. 15 appearance of Matobato showed the witness had testified about his kidnap-for-ransom case in exchanges with Gordon himself.

De Lima demanded that Gordon apologize to her for accusing her of “material concealment” when the transcript showed otherwise. But he stood his ground and De Lima walked out of the hearing.

Since Monday, the two committees have decided to call one more hearing focusing only on current alleged extrajudicial killings amidst the government’s war on drugs.

On his plan to file an ethics complaint against De Lima, Gordon said he had to talk with his colleagues about it first.

He said he was also ready to talk to De lima, adding he and his wife Kate pity her because she has been undergoing the same crisis they had undergone as a couple before.

Responding to Gordon’s statements, De Lima said she “sincerely appreciate the gesture of concern from Senator Gordon” as she said she was “with him in pursuing the truth in the investigations of the Committee on Justice and Human Rights.”

“While I respect his feelings on the matter, I do hope he would reconsider his stand on the alleged concealment of material information, as the concerned details were properly documented during previous committee hearings,” De Lima said in a text message.

Asked whether he would ask the senators to patch up things, Pimentel could only say that “nothing is impossible in the Senate.”

“We should learn to coexist with each other, but we should also appreciate the differences because we are expected also to debate, and to have differences,” the Senate President told reporters.  SFM