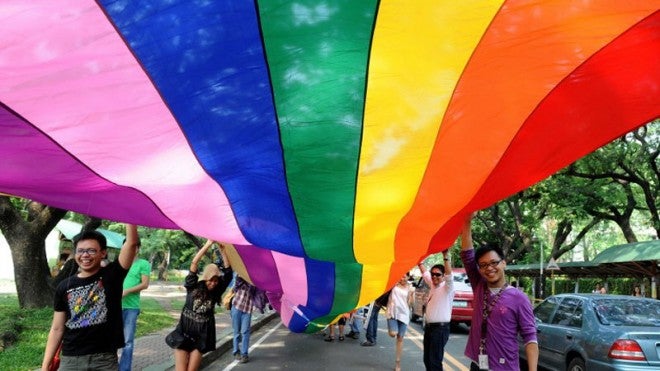 Filipino gays and lesbians march with placards on the University of the Philippines campus in Manila on June 28, 2011, as the world celebrate Lesbian, Gay, Bisexual and Transgender (LGBT) Pride. AFP FILE PHOTO

Lawmakers from the minority bloc at the House of Representatives on Wednesday opposed the proposal to legalize civil union for same sex couples, calling the union between the same sex unnatural and unsightly.

During the weekly press briefing of the minority bloc in Congress, minority floor leader Quezon Rep. Danny Suarez said it is not appealing to the eyes to see two men or women walk down the aisle and kiss in front of the altar.

Suarez also expressed his worries about the effect on the children once the father or the mother was gay and would be allowed same sex marriage.

He called members of the lesbian, gay, bisexual and transgender (LGBT) community as “irregular” who he used to laugh at when he was young.

“Noong araw, nung batang bata pa ako during my early days, we really make fun of those who are not regular,” Suarez said.

Suarez said the proponent of the proposed legislation Speaker Pantaleon Alvarez talked to him and asked for the minority floor leader’s support.

Suarez said Alvarez assured him the proposal was for civil union, not same-sex marriage which should be left to the mandate of the Catholic Church.

“We took a vote among us sa minority bloc. We were unanimous to reject it. Simply because we are going against the natural law of man and woman, and marriage to start a family,” Atienza said.

Atienza clarified, however, that the minority backed the bill prohibiting discrimination based on gender and sexual identity.

Atienza said God only created Adam and Eve, not “Adam and Steve.”

The lone dissenter in the group, Kabayan Rep. Harry Roque said the government has no interest in prohibiting same-sex marriage, citing the decision of the Supreme Court of the United States (Scotus) that allowed same-sex marriage in the US.

Roque said it’s only a matter of time before the Philippine Supreme Court take the tune of the Scotus.

“Ang Estados Unidos, napagdesisyunan na ng Korte Suprema nila, which I think might be followed by the Supreme Court in a couple of years. Walang valid state interest that would prevent marriage between the same sex,” Roque said.

In a press briefing on Monday, Alvarez said it’s about time Congress respected the constitutional rights of LGBT community to be happy.

Alvarez said his proposal would allow LGBT couples legal right to have civil union as recognized by the court.
He said his move was meant to send a message that it’s about time for the Philippines to allow same-sex union.

Alvarez said his proposal would amend the Family Code, which limits union between man and woman.
Alvarez clarified that his proposal would legalize same-sex union, noting that marriage should be left to the mandate of the Catholic Church.

He said he does not mind if the Catholic Church or deeply religious lawmakers would oppose the bill, noting that it’s part of democracy.

Alvarez said in the end, democracy is about the rule of the majority.

“Kaya nga tayo demokrasya. mayroon talagang opposition. Wala namang walang opposition. But the beauty of democracy is we can argue, we can disagree, but at the end of the day, it’s still the majority that prevails,” Alvarez said.

In the 16th Congress, then Speaker Feliciano Belmonte Jr. said it would be impossible for Congress to legalize same sex marriage in the country with its deep Catholic roots.

In 2015, openly gay lawyer Jesus Falcis III asked the Supreme Court to abolish the prohibition on same sex marriage in the Family Code.

The Office of the Solicitor General under the previous administration of erstwhile president Benigno Aquino III opposed the petition it dismissed as “intrinsically flawed.”
Falcis asked the Supreme Court to nullify Articles 1 and 2 of the Family Code, and Articles 46 (4) and 55 (6) of the same law. Articles 1 and 2 limit marriage between man and woman; Articles 46(4) and 55 (6) cited homosexuality as grounds for annulment and legal separation. JE