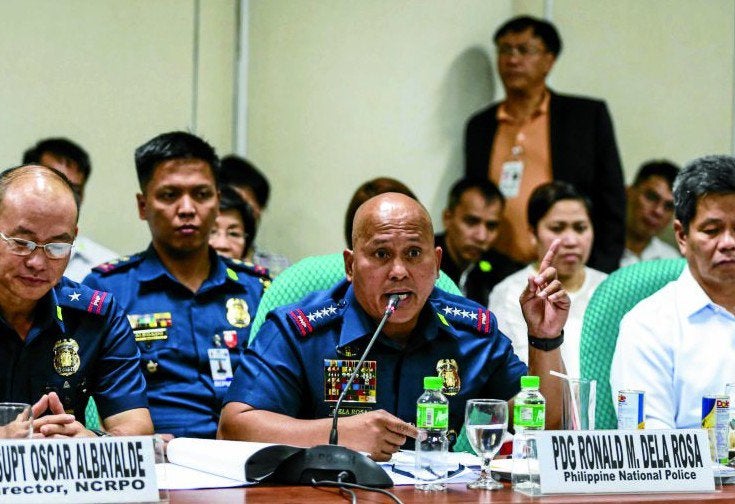 MANILA — Senators were stumped by the  death of a Saudi-bound Filipino worker, feared to be a victim of extrajudicial killing by the police.

This was after Sen. Antonio Trillanes IV presented television news clips on the case of Mark Anthony Culata at the resumption of the Senate hearing on President Duterte’s war on drugs.

Culata was found dead on Sept. 9 in Tanza, Cavite province. His body had bullet wounds, as well as torture signs and a cardboard that said he was a drug pusher.

But the news clip showed Culata’s mother denying her son had been involved in the drug trade and that he was in fact going abroad for a new job contract.

The news clip also showed a CCTV footage showing that Culata was stopped at a police checkpoint on the night of Sept. 8, something his mother said the Tanza police had initially denied.

Trillanes said the footage showing the police intercepting Culata, who was on a motorbike, indicated that Culata was a “possible” extrajudicial killing victim.

Confronted by Trillanes, Chief Supt. Augusto Marquez, director of the Philippine National Police Directorate for Investigation and Detective Management, said four Tanza policemen had been administratively charged in the case of Culata.

Marquez also said criminal charges were also being prepared against the four policemen.

Asked by senators why no criminal charges had been filed against the four policemen, PNP Director General Ronald dela Rosa said the National Bureau of Investigation  was looking into the case.

Dela Rosa admitted he had not been aware of Culata’s case. He said he was in Colombia at that time for a conference.

On questioning by Sen. Richard Gordon on whether the police had custody of the four, Dela Rosa said they had been reassigned to another section.

Sen. Panfilo Lacson asked whether warrantless arrest could be done in the police operations. Sen. Leila de Lima, a former justice secretary, said this could only be done if a person was caught in the act of committing a crime.

Lacson also asked whether ballistics tests were conducted on the four policemen, but police officials could only say that they would do this, more than three weeks after the killing of Culata.

NBI officials at the hearing said they were still investigating the case, but added that the CCTV footage showing that the policemen were the last to see Culata was “not conclusive” evidence that they were his killers.

But Gordon pointed out the police had not reported on the arrest of Culata, as seen in the news clip.

Trillanes later said the “coincidences” were too great and expressed hope the PNP would act on the case.  SFM