SPO3 Lascañas: I was not close to Duterte; otherwise, I could have helped my 2 brothers tagged in drugs and killed by cops
By: Christine O. Avendaño - @inquirerdotnet
Philippine Daily Inquirer / 07:24 PM October 03, 2016 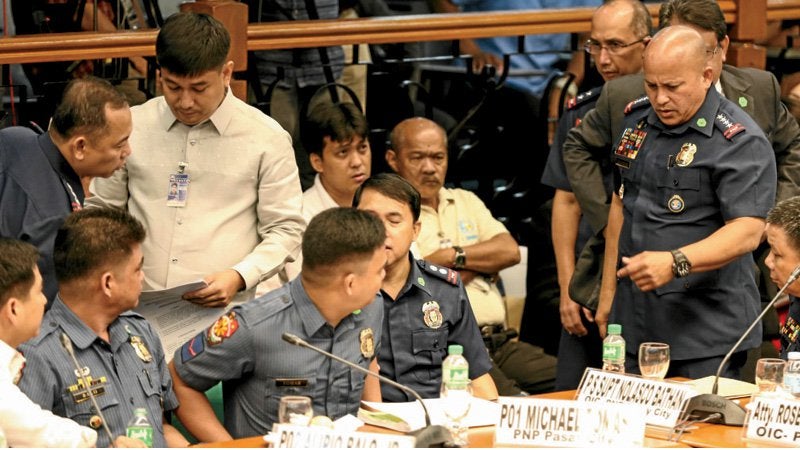 MANILA — A Davao City policeman alleged to be the head of the so-called Davao Death Squad on Monday, denied all the allegations against him by confessed hitman Edgar Matobato during the resumption of the Senate inquiry into alleged extrajudicial killings in the country amid the deadly war on drugs.

SPO3 Arturo Lascañas told the Senate justice and public order committees that no DDS was created to kill criminals in Davao City on orders of President Duterte when he was still city mayor.

“All lies,” was the repeated reply of Lascañas to the questioning by senators who grilled him whether he took part in some of the killings that Matobato claimed he did and how close he was to Duterte that the latter ordered him to kill certain people.

Also denying he was a member of the DDS was Senior Supt. Dionisio Abude who said that the heinous crime section of the Davao City police was not engaged in killing people as Matobato had claimed.

Matobato earlier named 22 policemen and rebel returnees who were members of the DDS under then Mayor Duterte. He implicated the President In the killing of more than 1,000 criminals in city when he was mayor.

Lascanas did not deny he knew Matobato, saying they did business together since as a side line he was a real estate broker and that they were able to sell five to six properties in three years. He also said he recommended Matobato to become the bodyguard of a newly elected mayor on Samal Island, a job which the latter held for three years.

“There is no DDS, that’s just media hype,” he said, also denying he was part of the “Lambada Boys” as Matobato claimed.

He also said he was not involved in bombing a mosque or abducting and killing Sali Makdum or even killing a man and feeding his remains to crocodiles.

To Sen. Leila de Lima, Lascañas said he did not know why Matobato was lying about his statements against him.

Asked by Sen. Panfilo Lacson what would be the motive of Matobato to tell lies about him, Lascañas said: “Somebody must be behind him.”

“My personal opinion, maybe it’s because of politics..Maybe he wants to destroy President Duterte,” he said of Matobato.

Lascañas also said he was not close to President Duterte, saying if he were, he would have been able to help his two brothers who were killed by the police in 2011 and 2014 for being involved in drugs.

For his part, Abude said he knew Matobato as he was a relative of a fellow policeman, retired Senior Inspector Eduardo Matobato

Abude denied he was also present during the planning of the 2002 killing of Makdum as Matobato alleged. He said he joined the heinous crime section in 2003.

On De Lima’s questioning, Abude admitted he was among 21 police officers penalized by the Ombudsman in 2012 for being unable to solve the unabated killings in Davao City being linked to the DDS.

He said cases in his jurisdiction were properly investigated but they were unable to solve them because there were no witnesses.  SFM