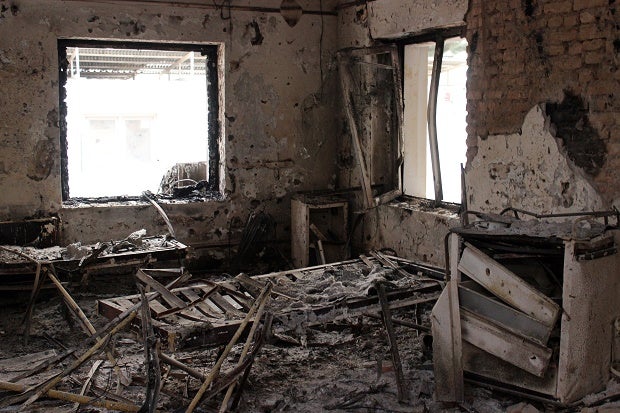 In this Oct. 16, 2015 file photo, the charred remains of the Doctors Without Borders hospital is seen after it was hit by a U.S. airstrike in Kunduz, Afghanistan. Inside the intensive care unit of the Doctors Without Borders hospital in Northern Afghanistan in the early hours of Oct. 3, 2015, the situation was as normal as it could be in the middle of an active war zone, the charity says in a report. Then an American AC-130 arrived and began firing its fearsome weapons. The Intensive Care Unit was hit first. AP FILE

KABUL, Afghanistan — Medical charity Doctors Without Borders (MSF) has hit out at the “unprecedented” number of attacks on medical facilities in Syria and Yemen, a year after the deadly bombing of its hospital in Afghanistan killed 42 people.

Monday marks the first anniversary of the US strike on the trauma center in Kunduz, which triggered global outrage and forced President Barack Obama to make a rare apology on behalf of the US military still deployed in war-torn Afghanistan.

“Over the past year, we recorded 77 attacks against medical facilities operated or supported by MSF in Syria and Yemen: this is unprecedented,” Meinie Nicolai, MSF president, told reporters in Kabul.

“Hospitals are now part of the battlefield,” she added.

MSF has said the raid on the hospital in Kunduz last October by a AC-130 gunship lasted nearly an hour and left patients burning in their beds with some victims decapitated and suffering traumatic amputations.

The organization has branded it a war crime. However, an investigation by the US military earlier this year concluded that the troops targeted the facility by mistake and decided they would not face war crimes charges.

MSF had called repeatedly called for an independent international inquiry.

The charity spoke out as condemnation grew over the bombing of hospitals in the rebel-held east of the Syrian city of Aleppo, which has been under attack by the regime and its ally Russia.

“Health facilities and staff are targeted in Yemen and Syria … most often in the name of war against terrorism,” Nicolai said.

“In Syria, attacks against medical centers for civilians and against ambulances are systematic.”

She added: “As of today, we are not back yet in Kunduz. We have left northern Yemen. We struggle to give support to the people in Syria.”

Guilhem Molinie, MSF country representative in Afghanistan, said he had access to 700 of the 3,000 pages of the US report on Kunduz — the rest were classified.

“The US forces, operating in Kunduz on that date, assumed that self-defense was allowing them to attack,” he said.

“The entire city of Kunduz was judged as hostile. This is extremely shocking for us which means that everybody in the city on the date was assumed to be hostile.” CBB